Dell XPS 14z coming to the US this fall with Core 2011 processors, NVIDIA graphics, and a thin bezeled 14-inch display

Share All sharing options for: Dell XPS 14z coming to the US this fall with Core 2011 processors, NVIDIA graphics, and a thin bezeled 14-inch display

We had a hunch that Dell wasn't going to call it quits with the XPS line after the 15z, and sure enough, the company's adding a 14-inch member to the family today. The Dell XPS 14z, like the 15z released back in July, is all about packing full-on performance into a somewhat thin and light chassis. It's just under an inch thick so we're not talking MacBook Air or Ultrabook class here, although Dell's still managed to fit a slot-loading optical drive in as well as a slew of ports, including USB 3.0 and HDMI jacks.

However, the stand out feature of the design is the thin bezel 14-inch display, which Dell says has allowed them to shrink down the chassi to the size of a typical 13-inch laptop. Dell couldn't confirm if it was the same LG Shuriken screen display that's in the Gateway ID47 and Samsung claims to be doing the same thing with its own technology in the Series 7. Regardless, there's no doubt that this move to shrink the bezel is a trend right now.

In terms of configuration options, you're pretty much looking at the 15z in a smaller package. It will be available with Core i5 or i7 processors, Nvidia Optimus graphics, and a number of hard drive options. The 14z is launching in China today and will be hitting the US and Europe sometime this fall. We're trying to dig up some more specs, so stay tuned and check out one more picture below. 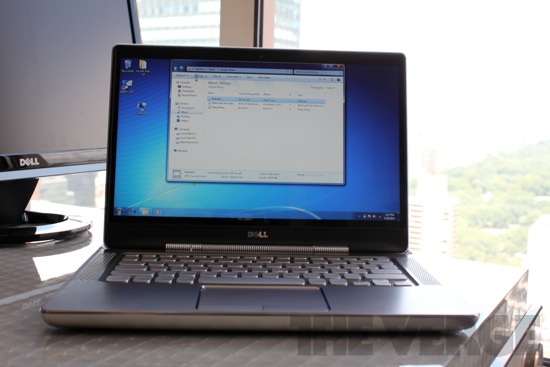