We've got a few more details on ViaSat's updated 12 Mbps satellite broadband internet service, including pricing and availability info. The service is now being called Exede, and it'll be available on January 16th in the continental US, excluding some of mid-America.

We've got a few more details on ViaSat's updated satellite broadband internet service, including pricing and availability info. The 12 Mbps / 3 Mbps service is now being called Exede and it'll be available on January 16th in the US, though some of mid-America is excluded. There will be three different consumer plans; they all offer the same speeds, but they will come with either 7.5GB, 15GB, or 25GB data caps, and will cost $49.99, $79.99, and $129.99, respectively, with a two-year contract.

The company says that the new service is made possible by its ViaSat-1 satellite that launched late last year with 140 Gbps of capacity. The quoted speeds of the new Exede service are far better than its child company Wild Blue's current satellite internet, which only offers 1.5 Mbps dowstream. In addition to the speed increase, ViaSat says it has improved its "web acceleration technology." We don't have details on how this works, but company tells us it addresses the high latency that's typically associated with satellite connections. You'll just need to take ViaSat's claims with a grain of salt for now — we'll let you know what we think when we test the service ourselves at CES. 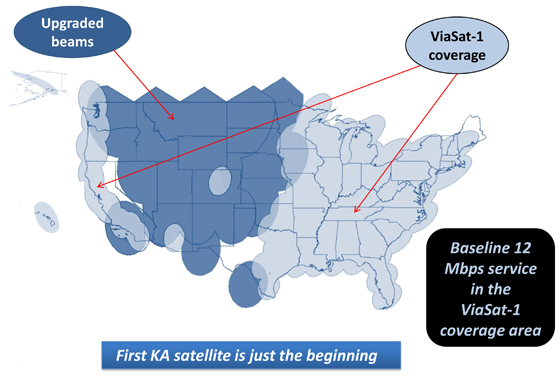