BlackBerry's PlayBook OS is being upgraded to version 2.0. It finally brings a new messages client, calendar, and contacts among various other improvements.

RIM formally announced PlayBook OS 2.0 yesterday, and I met with the product's senior marketing manager Jeff Gadway to check out all the features in the new operating system. Version 2.0 finally brings a native mail client to the BlackBerry tablet, along with calendar and contact apps. RIM also made some general aesthetic changes, and added a bulked-up version of BlackBerry Bridge and an eerily familiar "reading view" feature in the browser.

This is the most polished version of the PlayBook OS yet — not to mention the most full-featured. The homescreen has been refined, including drag-and-drop app rearrangement and the inclusion of folders. Like on iOS, you hold down on an icon to pick it up, and drag it on top of another to create a folder. There are still multiple pages for apps, but the predefined label headers of previous builds are gone.

It took over six months for the PlayBook to gain a native email client, but RIM has used the time to its advantage. The new Messages app is a central hub for not only email, but LinkedIn and Twitter as well. Twitter direct messages can be sent and received from right within the app, though you still need to use a dedicated app to reply to or compose a tweet. As of now there's no Facebook integration, and we're not sure if developers can hook into this or not, but accounts can be viewed as one unified inbox or individually. 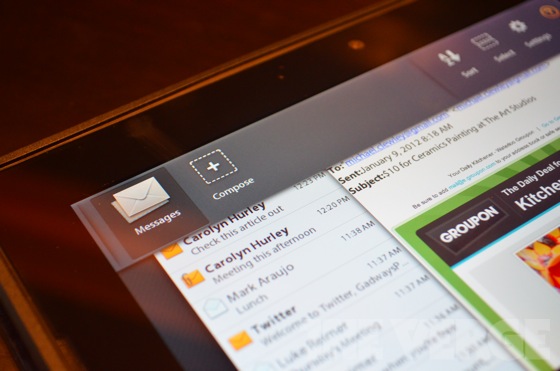 Swiping down from the top bezel brings down a multitasking bar for the Messages app, which allows you to keep multiple email drafts open while still preserving access to your actual inbox. You can't open actual emails in multiple tabs; it's restricted to drafts for the time being. Composing an email reveals the new rich text editor, which has support for fonts, lists, and colors. The keyboard now has contextual prediction, which can actually guess what words you may type next before you even type a letter. It has better autocorrect, too, and finally brings BlackBerry style shortcuts like double-space for period and auto-adding apostrophes to contractions. 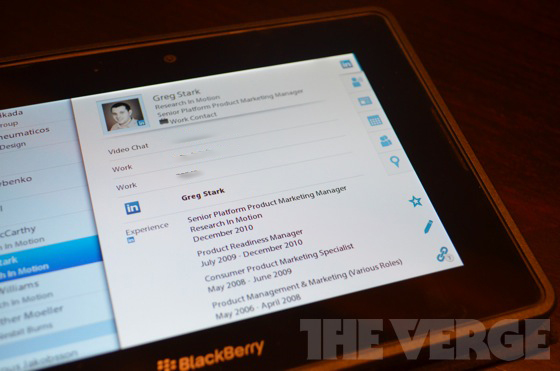 The new contacts app consolidates information from all your email accounts as well as LinkedIn and Twitter (a running theme here), linking together contacts' different profiles by email address and other unspecified syncing magic. Profile information from LinkedIn is aggregated directly into the interface, and you can even see mutual friends in another pane. Another tab along the right rail shows upcoming and past events that you have shared with particular contacts, linking directly into the also-new calendar app. 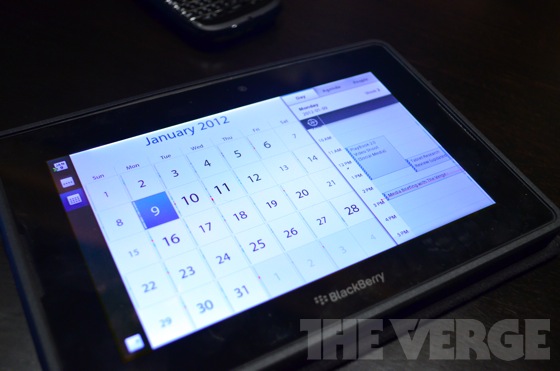 The Calendar app is finally making its debut in OS 2.0, and it's mainly standard fare. Appointments be rearranged through drag-and-drop, and it supports online calendars from Google and the like. As mentioned above, the Calendar works in tandem with your address book, and when you change an event time other guests can be notified automatically. 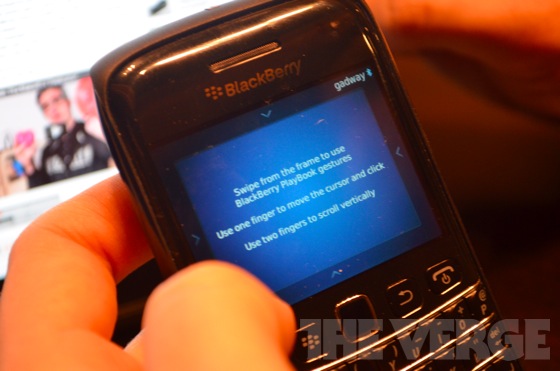 When the OS ships in February, it will bring with it a new version of BlackBerry Bridge that's markedly faster than what's currently available. BlackBerry phones can now be used as a remote control for the PlayBook: you can mouse around with the touchscreen or trackpad, and enter text with the physical keyboard. It also functions in presenter mode for controlling PowerPoint presentations that you may be delivering on your PlayBook. Finally, nearly all viewable content on BlackBerry devices — websites, videos, photos, documents — can now be opened remotely on the PlayBook via a new universal menu item. During the demo links opened pretty quickly, though I didn't really get a chance to test heavily.

While this OS update fills in many of the PlayBook's gaps, there are still a few big-ticket items missing. The largest of course is BBM, which is "still being perfected" for the tablet's big screen (and can still be used via BlackBerry Bridge). I personally don't see the point of needing the service on a device that isn't necessarily always on your person, but it'd be nice to have another chat option. The other missing item is true BES support, though BlackBerry Mobile Fusion is an ActiveSync solution that delivers the same functionality with equivalent encryption.

I'm intrigued by what RIM has managed to accomplish with this software release, though I can't help but feel that it may be too little, too late. When I asked about the current number of apps in BlackBerry App World, I couldn't squeeze a figure out of the RIM reps — though they did remind me of new releases like the venerable Angry Birds and more upcoming titles from EA. The PlayBook has an uphill battle ahead of it in a world dominated by the iPad and Android offerings), so it'll be interesting to see if this update manages to make any major changes in terms of the device's appeal. One thing is for sure, however: if RIM doesn't meet its self-imposed February deadline, it risks losing the few PlayBook owners who have staved out hope for the platform this long.