First glimpse of 'Star Trek: The Next Generation' for Blu-ray released

First glimpse of 'Star Trek: The Next Generation' for Blu-ray released

Creating high-definition versions of the original series of Star Trek: The Next Generation has proven an arduous process. Rather than just upconverting the original videotapes of the series, editors at CBS have been painstakingly piecing together the negatives loyally to the original cut, before digitizing them in 1080p. The result is stunning — the difference between the standard definition tape and the new edit is enormous, with more natural color reproduction along with the added detail you'd expect. It's especially significant in the effects — these were filmed using models, rather than digitally created, so the intricate work of the modelmakers really comes to the fore. The loyalty to the original series is evident, even down to retaining the now outdated 4:3 aspect ratio. 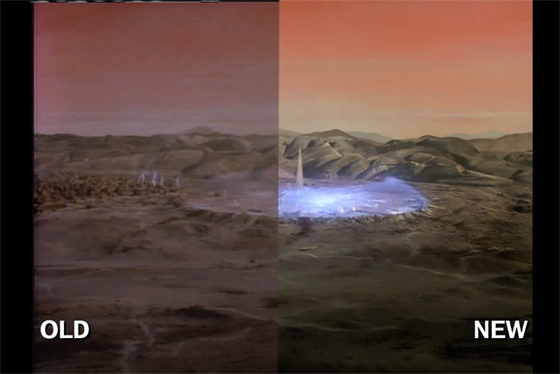 Of 178 episodes, only three have undergone the process to so far, which are now available to pre-order on Blu-ray for $21.99, and will be released on the 31st January. CBS aren't stopping at that, though: the rest of the seven seasons will be worked on in time, with the full series one being released in a box set by the end of 2012.