Lumia 900 to be released in March, says Nokia developer newsletter

Lumia 900 to be released in March, says Nokia developer newsletter

When Microsoft and Nokia announced that the Lumia 900 is coming to AT&T, the best either company would give us for a release date was in "the coming months." However, apparently the message that they need to keep things vague didn't make it to the people behind the Nokia Developer Newsletter, whose most recent edition may have pegged a March release date:

The Nokia Lumia 900 phone runs Microsoft Windows Phone 7.5. It is the biggest and fastest smartphone yet. And it will become available exclusively through AT&T in March.

That timeline matches up with Paul Thurrot's information. Although we may have to take issue with Nokia's claim that the Lumia 900 is the "biggest and fastest smartphone yet," we won't complain too much about a March release date. We know all too well what happens when a big phone announced at CES doesn't get released in a timely manner. If this information pans out, then all we really need to know is the price on this LTE phone.

Update: Until Nokia gets wise, you can see the web version of the developer newsletter here. 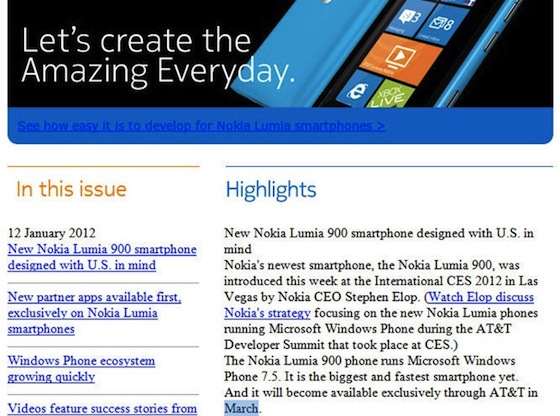