Smartphones are becoming a majority of the phone market, with 60 percent of new buyers preferring them. The market is increasingly dominated by iOS and Android, with major drops in BlackBerry and little gain in Windows Phone 7.

We already knew that over half of 18 to 44-year-olds had a smartphone, but now it looks like smartphones are solidly entrenched over feature phones. The latest Nielsen survey found that 45 percent of people who use mobile phones have smartphones, and that 60 percent of people who bought a device in the last three months use a smartphone rather than a feature phone. This latter number isn't a perfect cross-section of users — those who buy devices more often will be more represented — but it's a solid indication of what people are buying.

With smartphones supplanting feature phones, both iOS and Android are doing well, but other platforms will have some serious ground to cover just to get close. Android is steadily increasing its market share, and the iPhone was the device of the season, with 44.5 percent of new buyers saying they'd chosen it as a purchase — almost double the rate in October. The iPhone 4S made up over half of the new iPhones purchased, suggesting that we might be seeing a spike in popularity as people get the new device. Given that the 4S wasn't nearly as anticipated as the iPhone 5, a major iPhone redesign could mean an even bigger spike next year. 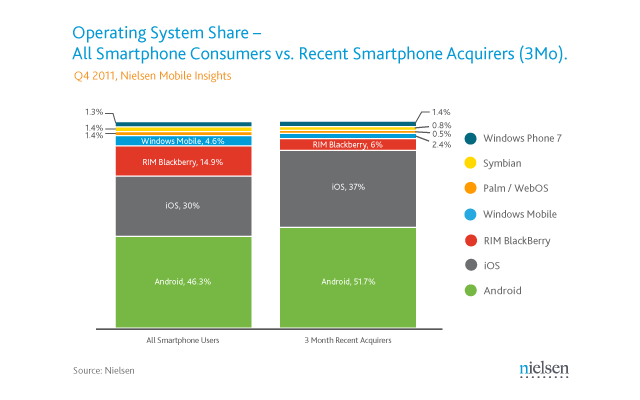 RIM, however, is continuing its long drop with a further decrease among new buyers. After starting the year at 23 percent market share, BlackBerry slid to 19.7 percent by August, and was down to 16.6 percent by the November. Now, that number is 14.9 percent, and a mere 6 percent of recent buyers use the platform. Windows Phone 7, meanwhile, is at barely over a percent, a number that's not growing among recent buyers. Despite the best efforts of competing companies, it's increasingly looking like "smartphone" means iOS and Android.