NetLED: an expensive way to save money on lighting via Wi-Fi

NetLED is a Wi-Fi-controlled lighting system that uses an iOS or Android app to select the most efficient brightness for individual tubes. The system uses half as much energy as standard non-dimming LEDs.

Share All sharing options for: NetLED: an expensive way to save money on lighting via Wi-Fi

For Japanese home or business owners more worried about wasting energy than wasting money, here's NetLED — a comprehensive cloud-based Wi-Fi lighting system controlled by an iPhone app (Android and iPad coming soon). After buying the server for 60,000 yen (around $780), you'll need to shell out 19,800 yen (about $250) for each light tube, or 14,800 yen ($180 or so) for a "slave" secondary tube, each good for around 40,000 hours.

These prices are around four times as expensive as standard LED tubes, so why would you go for them? Use case scenarios include controlling the intensity of light so that those closer to windows shine less brightly, or setting an energy consumption cap for each individual tube. The company says that if you install 200 NetLED lights you'll reduce power consumption over standard non-dimming LEDs by half, saving over 200 thousand yen (around $2,500) in power costs per year, thereby paying for itself in about two decades by our calculations. Obviously the savings will be much greater over the fluorescent fittings these are designed to replace. 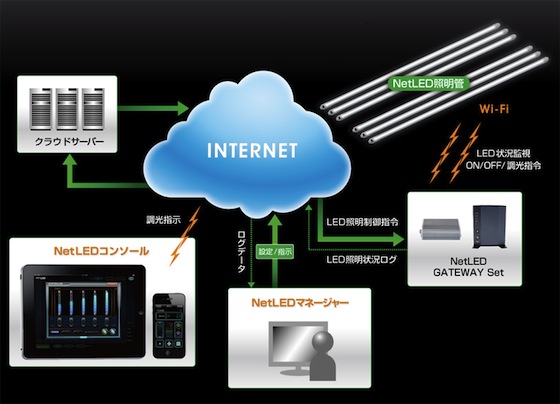