Why Nokia's Lumia phones are cyan, magenta, and black (and perhaps yellow and white)

Why Nokia's Lumia phones are cyan, magenta, and black (and perhaps yellow and white)

According to designer Tiina Aarras, Nokia's N9, Lumia 800 and Lumia 900 derive their distinctive shades of pink, blue and black from the CMYK color group

We're big fans of Nokia's N9 hardware design (which is quite similar to the Lumia 800 and 900), and in a recent post on the company's official blog, one of Nokia's colors and materials designers, Tiina Aarras, describes the chassis' design cues and inspirations. The handsets' vibrant colors derive from the CMYK color group (cyan, magenta, yellow, and black), invented in the early days of newspaper printing to produce colored comics. She says, "They’re distinctive modern design icons and people recognise them." Aarras, in reference to the recently released white N9, says the color was chosen "so you have the purest white body which creates a nice contrast with a black glass screen."

The N9 / Lumia chassis is crafted from a dyed polycarbonate plastic that, when nicked or scratched, will uncover more of the same colored plastic rather than leave noticeable blemishes. Getting the colors to work in conjunction with materials was no easy feat, as Aarras describes: "Making sure we had that powerful penetration and saturation of colour meant working with our partners to find exactly the right pigment - and then crafting it to the highest technical grade. That was actually the hardest part of the process."

As noted above, the CMYK color scheme includes yellow, a color we have yet to see wrapped around a Lumia handset. A few slides were leaked from a Microsoft meeting in France a few weeks ago that revealed (what appears to be) a Lumia 800 in yellow, white, and in the colors we've already known. We'll wait for an official confirmation from Nokia, but for now, you can take a look at the image below to get an idea of what they'll look like. 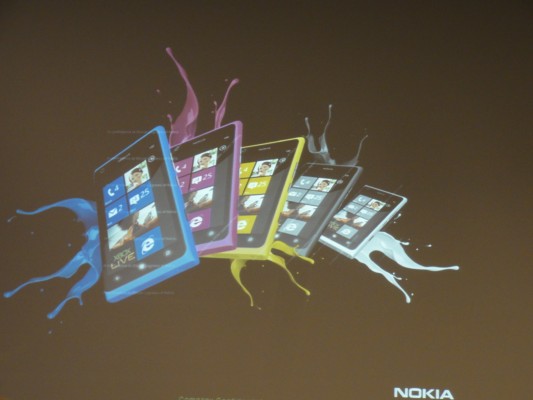