In Distrust That Particular Flavor, the reader gets to eavesdrop on William Gibson trying to tell himself something.

In the introduction to Distrust That Particular Flavor, a collection of nonfiction pieces written over the last two decades – autobiographical essays, travelogues, speeches, prefaces, even a quasi-record review – William Gibson lays his cards on the table. When he decided to become a writer, he strictly disciplined himself to be a writer of fiction, not a journalist or public speaker or record reviewer. And yet with success came invitations to do those other things, and the invitations meant new kinds of opportunities. "Opportunities," he writes, "to visit other places, to meet interesting people. A certain permission to ask questions. These things can prove extraordinarily valuable to a writer of fiction." Nonfiction assignments helped stoke the fire of his fiction; plane tickets from obliging editors meant seeing things that might otherwise go unseen.

You'd be forgiven, then, for imagining this as a gathering of B-sides aimed at Gibson completists; the man himself admits its beginnings as a "box of scraps" his publisher bound together to tide over fans until the next novel. He's equally deprecating about the writing inside. Not being fiction, "are violations of that early prime directive." They're hybrids, ostensibly nonfiction but assembled with a novelist's tools. That genre boundary troubled Gibson such that he "never felt entirely comfortable with the pieces collected here."

Yet despite the author's own caveats, much is worthwhile here. As an introduction to Gibson it would probably underwhelm new readers -- it simply doesn't have the coherence or sentence-level precision of his novels. The sustained enthrallment of Neuromancer or Pattern Recognition simply can't occur in a decade-old Wired article. Instead, the collection reveals other facets of Gibson's mind. For longtime readers of his novels, this feels like coming one step closer to The Source, or getting a peek behind the curtain, at the cogwork that makes his fiction move. His introduction concludes that as much as it discomfits him to do this work, "later, back in the place of writing fiction, I often discover that I have been trying to tell myself something." In Distrust That Particular Flavor, the reader gets to eavesdrop on William Gibson trying to tell himself something.

The first thing one realizes about Gibson is how little details stick with him. One reviewer compared his nonfiction to that of Tom Wolfe, which seems a little bit like grasping for the New Journalism representative nearest at hand. The comparison's apt only as far as it goes: both Wolfe and Gibson are, in Saul Bellow's phrase, first-class noticers. The important difference is that Wolfe assembles his details to explain social hierarchies; he sees stratification and power dynamics wherever he looks. For Gibson, the novelist, such details quite often lead to speculations on time and our place within it. 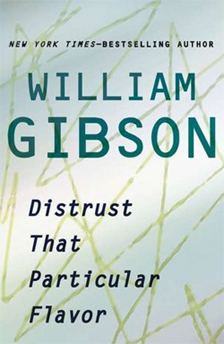 One essay, "Mr. Buk's Window," exemplifies this tendency. Written two weeks after the 9/11 attacks, it describes the titular window, belonging to an enigmatic antique dealer, as always filled with unexpected wonders: a cast iron fragment that might have belonged to the Brooklyn Bridge, or a model set of every ballistic missile in the arsenals of the US and USSR. These evocative leftovers "dredged from time and collective memory" are, in the vicinity of Ground Zero, dusted with "the stuff of the atomized dead." It's an image that could stand in for much of Gibson's work: the stuff we make, around which we arrange so many hopes and anticipations, fears and possibilities – those things too are sprinkled with death.

"Dead Man Sings" opens with a similarly melancholic sentiment. "Time moves in one direction, memory another," Gibson writes, "We are that strange species that constructs artifacts intended to counter the natural flow of forgetting." And because time and forgetting are natural forces, those artifacts always have the hint of the uncanny about them. Gibson notes the relative novelty of recorded music: it's only recently that Elvis could keep crooning from beyond the grave. Yet rarely do we stop to consider this change, another aspect of what Gibson calls the "communal, prosthetic memory that we have been building since before we learned to build." The memory lets the dead man sing.

Gibson's vision is always tuned to this uncanniness just beneath the surface of everyday experience. He will probably forever be introduced as the man who coined the term "cyberspace," giving name to a then-infant concept. And the concept came to him through careful observation, when he noticed the rapt attention arcade gamers devoted to the notional spaces in front of them. They were stepping into that space of memory, which is also a space of possibility.

What honed his eye for such revealing details? In our interview, he describes growing up with a parallax view that let him see the present from the imagined perspectives of both the present and the past. Another way of putting it is that he cultivated a sense of history. And unlike many of the science-fiction writers he grew up reading, he never assumed that the Future would arrive like a descending monolith, removing all traces of what came before. One oft-cited (and yet frustratingly unverifiable) quote has him declaring, "The future is already here. It's just not evenly distributed." The futures of Gibson's novels are always arriving, often in places we forget to look.

As an abstraction, this view – that the future emerges from the present, which has its roots in the past – doesn't sound groundbreaking. But Gibson's real theme, as he's admitted, is time's effect on human beings. We too become artifacts, material objects shaped by time's tides. We just happen to be conscious (sometimes) of the changes we undergo, and (even less frequently) able to direct those changes. Time is always working upon us. Gibson remains acutely aware of this, and it shades all of his work, fiction or nonfiction. Once you notice it, it's hard not hear an undertone of reserved, melancholic humility in everything he writes.

The most typically "Gibson" of the essays in Distrust That Particular Flavor closes the book. "Googling The Cyborg" is the most recent piece, from 2008, and in it he tries to explain what his work has to say about technology. He begins with the robots he saw as a kid, in a movie serial called The Mysterious Dr. Satan. He connects them to Vannevar Bush's memex, which Gibson sees as a proto-cyborg. These were bits of the future, scattered through the past; today's cyborgs are us, with our ubiquitous computing and permanent, global connectivity. Biological evolution for humans, he notes, has stopped. A different evolutionary force will take up where biology left off, and how we'll be changed in time, William Gibson can't predict. "Technology has stopped us," he writes, "and technology will take us on, into a new evolution, one Mr. Bush never dreamed of, and neither, I'm sure, have I."