HP has gone into detail today on what webOS components will be open sourced over the coming months, making Enyo 1.0 and the newly-announced Enyo 2.0 available immediately.

Following up on its December announcement that it would open source the platform — a last-ditch effort to make it viable — HP has gone into detail today on exactly when and how developers will be getting access to webOS code. The company expects the entire open sourcing process to be complete by September, while Enyo, the application framework that debuted on the TouchPad and underpins webOS 3.0, is available as of today along with related developer tools. When open sourcing is complete, the finished product will be known as Open webOS 1.0.

Additionally, HP is releasing a major refresh of Enyo, version 2.0, which starts to make good on HP's promise that it would continue to "be an active participant and investor in the project." Enyo 2.0's draw is that it's not tied to WebKit — it's fully browser-independent, which means you'll be able to write Open webOS apps that work in Internet Explorer, Chrome, Firefox, and so on. The company says that by taking webOS beyond hardware and letting developers write apps that work natively in any browser, it helps build an ecosystem — and an ecosystem is exactly what the platform needs right now if it has any hope of succeeding.

Beyond today, HP expects major releases roughly every month for the next six or seven months, some of which will make some pretty significant changes to webOS's internals. The biggest might be the switch to the standard Linux kernel — a la Android — which will make it far easier for OEMs and developers to get the platform bootstrapped onto a wider array of hardware thanks to abundant driver availability. The company will be moving to the Apache 2.0 license wherever possible to ease and streamline development and deployment for third parties; HP says that "it provides a legal framework that balances open innovation and a dependable user experience, which is consistent with HP's vision for webOS."

As for existing hardware, it'll be possibly for developers to get Open webOS builds onto their TouchPads over the course of the year, but regular end users — those without hacking chops — can expect an update in "late summer." Surprisingly, HP says that it's "looking" at all webOS devices to see if, when, and how to make Open webOS available for them, so Pre, Pixi, and Veer users of all flavors should keep their hopes up. 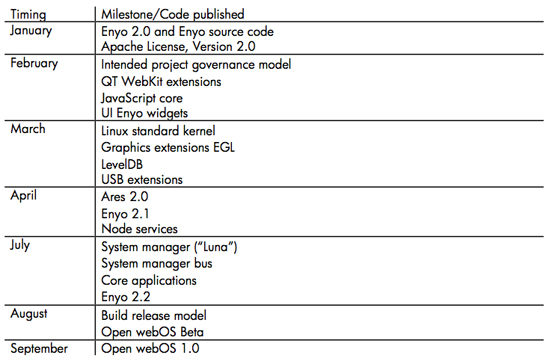 More from this stream Turmoil at HP: a CEO shakeup, executive exits, and an open source future for webOS