Eee Pad Transformer Prime with ICS: a preview of Android 4.0 on a tablet

Eee Pad Transformer Prime with ICS: a preview of Android 4.0 on a tablet

A review of Ice Cream Sandwich or Android 4.0 for tablets. A look at the new software on Asus' Transformer Prime tablet.

When Asus' Transformer Prime hit the market in early December, it was undoubtedly the best tablet hardware on the market. I said as much in my original review: it had a brand new quad-core Tegra 3 processor, the new 8-megapixel camera took impressive stills and video, and the keyboard dock, like the original Transformer's, continued to add an entirely different dimension to the tablet experience. However, it was the software — Android 3.2 aka Honeycomb — which held the tablet back. Not only was the browser performance slower than it should have been, but Honeycomb itself lacked the fit and finish to match Asus' great hardware. Google's Ice Cream Sandwich update is supposed to solve all that, and just last week Asus rolled out the over-the-air upgrade. So, have all the software woes melted away or are there still some outstanding issues with the operating system? I've spent the last week testing the new software to find out.

User interface
On the Galaxy Nexus, Ice Cream Sandwich feels like an entirely new operating system, but on a tablet it feels a lot like Honeycomb. That's not a bad thing, but a lot of the Honeycomb UI blueprint still remains. The back, home, and recent apps buttons live in the lower left-hand corner and the application tray shortcut in the upper right hand corner. Jumping to all the different corners to navigate has always been a bit jarring, and I can't help but wonder why Google didn't just center the app tray on the bottom edge, like it has on phones. Perhaps, they thought it made more sense with the more common horizontal orientation of tablets, but it would have been nice if it were a customizable option of some sort.

There are some notable tweaks that I find extremely useful on a tablet, however. You can now swipe away apps from the recent apps list; this has functioned as a multitasking tool in the past, but now swiping away apps (a la webOS cards) actually pulls it out of this list and in some cases closes the app. You can similarly swipe away notifications from the notification and settings tray in the bottom right corner. I also appreciate the new folder functionality and the new way of adding widgets: rather than holding down a finger on the homescreen and the widget panel rising up from the bottom of the screen, you now add your favorite weather or email widget from the app tray. The widget page is tacked on to the end of the app pages.

Overall, the UI experience isn't drastically different, but some of those little tweaks — notably swiping away open apps and notifications — do make it easier and more intuitive to navigate.

The biggest difference between ICS and Honeycomb on the Transformer Prime is stability. I saw a few crashes when I first got the Prime, and while Asus has released a few Honeycomb updates since its release, the Android 4.0.3 build seems like the most stable yet. In the last week I only encountered one Force Close and I think that might have had to do with a bad website.

Speaking of websites, browser performance has also been much improved. There was noticeable scrolling lag with the Honeycomb version, especially on loading this very site. That's not the case anymore; scrolling and pinch-to-zoom gestures are very fluid. Also improved is the camera speed — it now focuses quicker, and thanks to ICS' faster shutter feature, you don't have to wait more than a second for it to snap a picture. I'd like to see ICS running on more tablets to make a final call on if this OS is finally stable enough, but the performance I've seen on the Prime is a very good indication that Google has fixed a lot of the stability and speed issues that plagued Honeycomb.

Note: I've included new benchmarks above, though I really wouldn't put too much stock in them (some have actually said Quadrant hasn't been optimized for ICS yet). As I've stated in the paragraphs above, the end user experience feels much faster and more stable.

Like we detailed in the Galaxy Nexus review, a lot of the core Google apps have been reworked in ICS. On a tablet, many of them still feel like they did in Honeycomb, though they have been spruced up a bit with Google's new Roboto font and some other styling changes. The biggest changes on a tablet really come with the Camera and Browser — Gmail and the Calendar look a lot like the Honeycomb versions. The Camera app now has built in photo editing tools, which can be a lot of fun to mess around with. The Browser now has a "Request Desktop Site" setting, which is a godsend for those who continuously have had to look for that "go to full site" button on webpages.

What ICS doesn't magically change is the selection oF APPS

What ICS doesn't magically change is the selection and quality of the tablet apps available in the Android Market. I have consistently pointed out the lack of tablet-optimized apps in my Honeycomb tablet reviews, and it looks like it will be a complaint that persists. While there have been some notable additions and there are some decent tablet-optimized apps (News360, Plume, and TapTu come to mind), others like Facebook and Twitter haven't been redesigned to take advantage of the higher resolution screen, making the experience flat-out disappointing. I should mention that I ran into no issues running apps, even ones that haven't been tweaked for Android 4.0 yet, on the tablet, but I've always been of the mind that phone apps are simply not good enough when you have a larger screen.

I can't say exactly what it is that is holding some of these app developers back from developing tablet apps for Android, but I have said it before and I will say it again: the Android tablet app selection just cannot compete in quantity or quality with the options available for the iPad. If you're content with a tablet experience centered around e-mail and web browsing these app issues likely won't bother you, but if you're seeking a really beautiful app experience, Android tablets simply don't yet provide it.

The question isn't if you should update your Transformer Prime to ICS — the answer to that is "yes, you should." The main question really is: does the software make the Android tablet experience as good or better than the one on competing tablets, aka the iPad? Like we concluded in the Galaxy Nexus review, this version of Android is the most polished yet, and from a core functionality point of view it is robust and stable. It may not be as easy to navigate as iOS on the iPad, but some of the new tricks — improved multitasking, folders, etc. — do feel like a step above the experience you get on the iPad. However, the remaining issue is, and will continue to be, application options. Google can continue to polish and improve Android for tablets, but until there's a significant uptick in tablet app quantity and quality (that means optimizing for the larger screen) it won't be enough.

Note: During testing, the Transformer Prime fell off my bed causing the LCD to die. I will let you infer what this means about the durability of the tablet, but I want to thank LAPTOP Magazine for lending me their unit to shoot the video below.

We're having some issues with our rating tools right now, but below is the revised score of the Prime with Android 4.0. 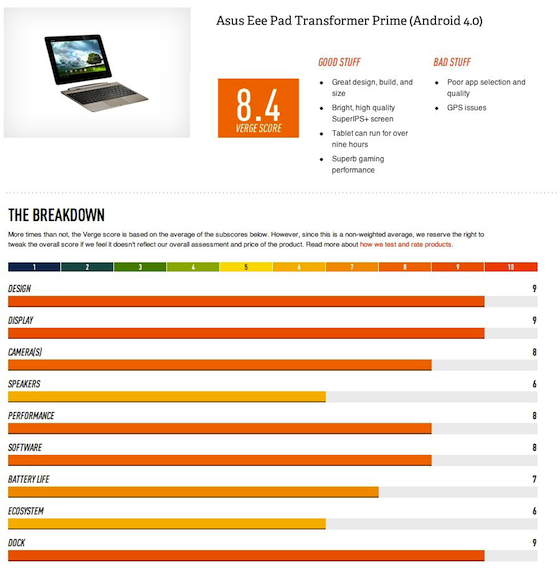