Researchers at the US Department of Energy's SLAC National Accelerator have developed both the world's most powerful and world's most precise lasers.

Share All sharing options for: SLAC develops two new record-breaking lasers: most powerful and most precise

Researchers working in the US Department of Energy's SLAC National Accelerator Laboratory at Stanford University have hit upon two new major developments in laser technology by creating both the world's most powerful and world's most precise lasers. Both experiments used the Linac Coherent Light Source (or LCLS), an X-Ray laser that's a billion times brighter than any other X-Ray source.

The world's most powerful claim comes with an impressive proof — the team has been able to simulate the heat of material inside stars. The LCLS was targeted at a miniature piece of aluminum foil with rapid-fire pulses from the laser heating it to over 3.6 million ºF (2 million ºC). While this is a long way from the 25 million ºF (13.9 million ºC) of the Sun, it's a chance for the scientists to probe the behavior of solids as they become plasma. The team says that this will help to "understand the conditions that exist inside stars and at the center of giant planets within our own solar system and beyond." 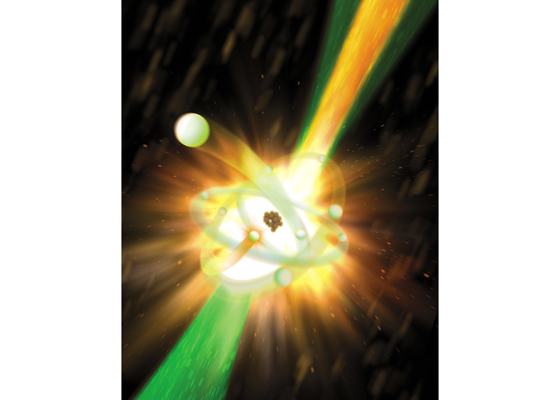 The most accurate laser also uses the LCLS but at an atomic scale. The same power is tapped to knock electrons from a neon atom, which in turn releases tiny bursts of X-Ray radiation and allows the researchers to see inside the atom. Project leader Nina Rohringer said, "we envision researchers using this new type of laser for all sorts of interesting things, such as teasing out the details of chemical reactions or watching biological molecules at work. The shorter the pulses, the faster the changes we can capture. And the purer the light, the sharper the details we can see."