Debate rages as Spotify, MOG, and Rdio kill / save the music industry

The current state of the industry is rife with finger-pointing. Who devours — and who's getting screwed out of — the $9.99 I drop into this darkened pool every month?

Share All sharing options for: Debate rages as Spotify, MOG, and Rdio kill / save the music industry

For the conscience-laden music consumer, streaming music services present an interesting quandary. By separating the concept of "legal access to music" from the age-old paradigm of "paying the artist for an entire song or album," they've presented us with a whole new set of ethical dilemmas to worry about. Instead of buying your music, you pay a subscription fee that is in some way filtered down from Spotify to record label to artist, based on some opaque algorithm of pay-per-play, which is based on some opaque deal struck between the label and Spotify, and then the label's opaque individual contract with each of its artists.

I suppose what I really want is some sort of "free range" sticker slapped on my music consumption, so that I know the artist was ethically treated in this transaction. Unfortunately, the current state of the industry is rife with finger-pointing, and I have no idea who devours — and who's getting screwed out of — the $9.99 I drop into this darkened pool every month.

What I do know for a fact is that some artists aren't happy with streaming services. Notable pullouts include Coldplay, Adele, and the Black Keys (each of whom have removed their most recent albums from one or all of the services), while many artists and catalogs have never been available at all.

The telling quote to me is from the Black Keys interview where they explained their decision to pull their new album, El Camino, from streaming. "I always pay for music," says Patrick Karney, the drummer and apparent spokesman for the band, as if to say that paying for a streaming service is different than paying an artist for music.

He goes on to say that "there's a lot of stuff about some of these services that a lot of people don't really know," and that deals are "more fair" for labels than artists. This lack of knowledge is a big hangup for a lot of the parties involved, and before we can all embrace the beautiful future that streaming services provide, it might be nice if somebody could clarify who exactly these deals are "more fair" for.

I spoke with the CEOs of Rdio and MOG about this, and neither could shed much light on these mysterious deals. Their agreements with labels are mostly confidential, and the payout contracts labels have with artists differ artist-to-artist. One problem is that song royalties aren't the only money that's changing hands — services pay for exclusivity, and labels cut deals to get their artists more heavily promoted by a service, and those upfront costs and windfalls may or may not be passed along to artists.

Still, the general consensus from everybody I talked to is that a "larger revenue pie" in music can only be a good thing, as long as it's distributed well. "The average iTunes consumer spends $40 a year," says MOG CEO David Hyman, "of which the labels are getting about 60-70%." In comparison, labels get 65% or so of MOG's income, which is $10 a month for a premium subscription (though $5 subscriptions and a free service are also available).

The average American spends only $17 a year on music

"I have my own black hole in knowledge when it comes to individual deals between artists and labels," admits David, "but I do know that the content owners, the labels and the publishers, are getting a lot more money out of these subscription services than they're getting from iTunes."

Things look even better for streaming services when you consider that the average American spends only $17 a year on music, a number cited to me by an indie label executive who wished to remain anonymous. "If you get more folks spending $17 a month on music," he says, "there's a bigger pot of money to split up and it lets us use the power of our own marketing rather than gatekeepers to develop fans and convert that most precious commodity — attention — into revenue, however that consumer might choose to engage."

The word "attention" is very important, because while many people get hung up on straight revenue (you know, people who like making money), streaming services are also a perfect place for artists to be discovered, and subsequently promoted, by people who wouldn't risk buying their album blind. Of course, that's the line piracy proponents have been pushing for a decade, but when you combine painless exploration with an actual "revenue pie" to be divied up, things get very exciting for the future of music.

My indie exec says Spotify is already "a top revenue account worldwide," along with YouTube. "But they are also promotional. That's why this is all so interesting... a video on the home page of YouTube is a incredible promotion, but it's also cha-chinging." I don't know what the word "cha-chinging" means in labelspeak, but it sounds like a positive adjective.

In fact, the primary "cha-chinging" innovation in streaming services right now is all centered around discovery. According to David, the internal mantra at his company is that "MOG does the work for you." They personalize the home screen based on personal interests, and have been working hard on their radio algorithms, monitoring tracks you skip and favorite, and working in deeper cuts over time from artists you like. If it sounds a lot like Pandora, that's probably intentional. 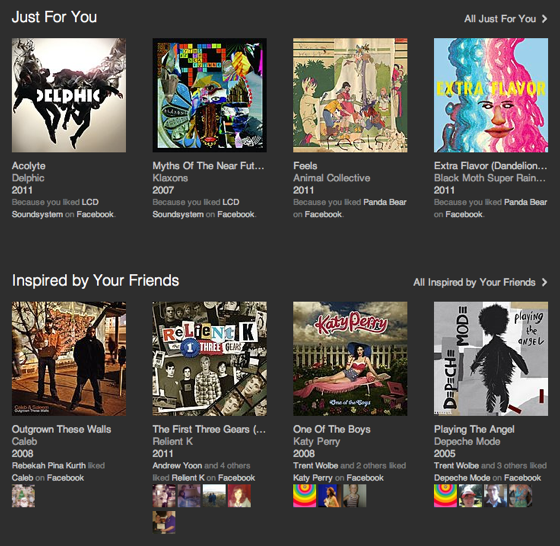 MOG's home screen, with recommendations based on my Facebook likes.

Rdio's on board as well: "Passive listening is something that's critical in the overall experience," says Drew Larner, the service's CEO. 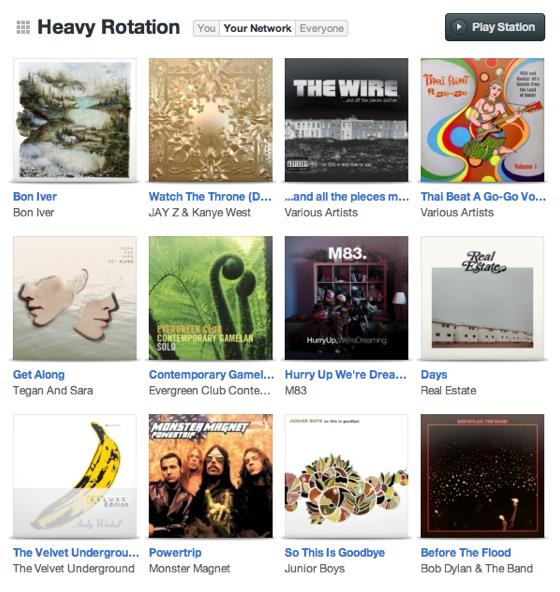 Despite Pandora's big head start, the huge libraries and lack of radio-style licensing restrictions on for-pay streaming services means there's a ton of opportunity here to offer something people have never heard before — namely, everything. And the seamless operation is a big leg up on ad hoc music piracy: "Even if 14 million songs were free, people would still gravitate to radio services," says David. "I hate to say it, but my mom listens to the music stations that come with her cable TV."

Still, as these services grow to prominence, they're outmatched by iTunes in terms of library control and management. Of the "Facebook wave" of streaming services (Spotify, Rdio, MOG), only Spotify offers a local app that can play regular MP3s, while Rdio and MOG live entirely in the cloud. Both CEOs admitted to me that they consider making a move to offer a "locker service" like Google Music, Amazon, or iTunes, on a regular basis, but that they have other priorities right now.

"[Rdio's] hope is that in time it's not going to be necessary," says Drew. That hope is a hope in the magic of "scale," and a dream that everything anybody would want to listen to will be available for streaming. Having a 14 million song library can do wonders for a streaming service CEO's self confidence.

"It's been on [MOG's] roadmap for years, but it's always the bastard child that never gets done, because there are almost more important things that we end up doing" says David. What's more interesting for MOG is the possibility of scanning local collections to further improve recommendations, and David doesn't think it's that hard to just switch apps when you want to get your music from a different source.

"The best chance we have for interoperability is Facebook"

Something else that isn't being addressed just yet is playlist lock-in. In the beginning there were iTunes playlists and burned CDs, but these days I have dozens of playlists across Rdio, Spotify, MOG, iTunes, and Rhapsody (I admit, I have a bit of a loyalty problem). It's even worse when I consider all the playlists my friends have made on services I'm not on that I therefore don't have access to. I've been trying to wean myself off Rdio this week in favor of Spotify's superior, hiccup-free playback, but losing the ambient recommendations of my peers (most of which use Rdio) is really troubling.

I asked Drew if Rdio was looking into helping me move to Spotify, and he didn't seem very interested: "From a competitive standpoint, why would we do that?"

MOG sees the need, but David says that all efforts at a single standard for playlists (I'm not sure which efforts he's referring to, he admits that the streaming CEOs don't chat regularly) have all failed in the past. "The best chance we have for interoperability is Facebook," he says. He seems to be right. While my highly curated Rdio friends list can't follow me everywhere, it's hard to go anywhere on the internet these days without knowing what my general Facebooks friends list is listening to right now.

While music streaming services aren't a "new" idea in internet years, they've really brought serious change to the industry in the past year or so. Perhaps part of the problem with understanding that change is that it's different place to place, and artist to artist. Even the Black Keys admit that streaming services are great for discovering smaller artists, while larger artists like themselves don't necessarily need the exposure. Of course, while that dissension gets a lot of exposure, it's a minority view — in fact, a good number of the notable holdouts, like Metallica, Red Hot Chili Peppers, Gillian Welch, and the Black Keys themselves, are all represented by a single management company called Q Prime, who is rumored to have a dispute with labels over the streaming deals. I reached out to Q Prime for comment, but didn't receive a response.

A recent study by analyst group NPD, which came to the obvious conclusion that streaming services like Spotify discourage the purchase of music in other formats, prompted STHoldings to pull more than 200 labels of music from streaming services — mostly in electronic music genres, in case you didn't notice the disappearance. Meanwhile, Universal Music Group's Rob Wells, who is a client of NPD, says that cannibalization claims are "absolutely bogus," and that each of the bands it's been tracking on Spotify over the last six months "has earned more money from its album being on Spotify than it has from being on any other services."

While the debate still rages in the US, in countries like Spain and Sweden where piracy had totally destroyed commercial music distribution, streaming services have been an unqualified godsend — creating significant revenue where there was none.

Hopefully we'll eventually get more transparency about how these deals work. Widespread piracy has caused so much outcry from labels and artists, so it would be nice if widespread monetization could get some more vocal proponents from the same camp. In the meantime, the hope is that someday soon artists won't have to step out in faith when putting their music up on Rdio or Spotify or MOG, betting their paychecks on streaming services making them more money than iTunes and physical sales alone — it'll just be fact.