The Washington Post's Paul Fahri says that Siri is saturating our spectrum, but that's not the case.

The Washington Post's Paul Farhi posted an opinion piece this week entitled "How Siri is ruining your cellphone service," in which he says that Apple's voice-powered assistant — a staple of the iPhone 4S, and presumably every iDevice going forward — is a "bandwidth guzzler" that's "flooding" our mobile networks with unprecedented data utilization, a trend that will ultimately saturate available spectrum. We should "prepare for higher cellphone bills," he says, or — perhaps looking to rile the defenders of net neutrality — "we could put some traffic cops on the beat to regulate our data demands and limit the traffic snarls and bottlenecks."

GigaOM's Stacey Higginbotham does an excellent job of debunking the piece, noting that Siri itself does not consume a lot of data — in fact, Ars Technica took a look at it a couple months ago, estimating that even heavy usage (10 to 15 Siri requests a day) would generate under 30MB of usage in a month. Even if you're on a 3GB data plan — the smallest reasonably-sized smartphone data plan that AT&T currently offers — that's not going to hurt your cap, and it's certainly not going to make much of a contribution to the nation's spectrum crisis. For that, we'll look toward Pandora, Netflix, Rdio, SlingPlayer... the list goes on. Siri is the least of our concerns. And what percentage of your Siri usage takes place on Wi-Fi, anyway, where it's a complete non-issue?

The basis for Farhi's article appears to be a single study from British research firm Arieso, which says that iPhone 4S users are "demanding twice as much data as iPhone 4 users and three times as much as iPhone 3G users." The company doesn't reveal its research methodology for the study in its press release, nor does it say that Siri is responsible for the alleged jump in data consumption — it appears Farhi is drawing that conclusion himself, since Siri perhaps the only feature specific to the 4S that's known to consume data directly.

We had a chance to look over Arieso's full report, which doesn't clarify the methodology at all. It simply says that it "addresses the recent data demands of over 1.1 million distinct subscribers over a single, 24-hour weekday in a Tier-1 UMTS market with a mixture of urban and suburban morphologies." Here's the list of devices Arieso looked at in that one day, all of which it says had over 1,000 active subscribers: 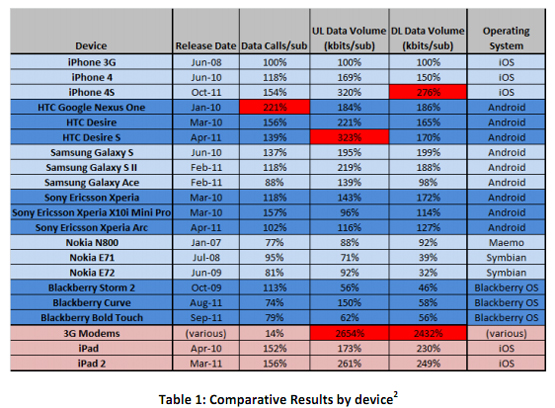 Arieso doesn't reveal what single country it studied — something that you'd clearly consider when you're analyzing the behaviors of wireless subscribers, since plans and plan structures vary widely from country to country — but we can safely say this isn't the United States; the Samsung Galaxy Ace, Sony Ericsson Xperia X10 Mini Pro, and Nokia N800 (presumably Arieso meant the N8, or perhaps the N900) wouldn't register a blip. And the entire study needs to be called into question, anyway: why is the BlackBerry Curve consuming 12 percent more download data and 94 percent more upload data than the BlackBerry Storm 2? Perhaps more damningly, why is the Galaxy S downloading more than the Galaxy S II?

On a fundamental level, Farhi's root concern is sound: data consumption by smartphone users continues to grow by leaps and bounds, and we need to do something about it. But Siri isn't the enemy — it's not even on the radar.