Remember those ice breaker games in elementary school? You know, where everyone gathered in a circle and nervously revealed a little bit about themselves. I think we should do that!

What brought you to The Verge? What would you like to see on Vox Games? And let's talk about what makes you you. Like what are your favorite games? What do you do when you're not gaming? Do you use a microwave? People keep telling me they're bad for you, but I'm not sure I buy it.

My name is Chris Plante. I have a beard and a modest collection of flannel button-ups.

I hail from Lee's Summit, a rapidly developing suburb of Kansas City, Missouri. It's internet famous for appearing in the film Jesus Camp. It also produced Jonathan Wendel, aka Fatal1ty. This is the least flattering photo I could find. 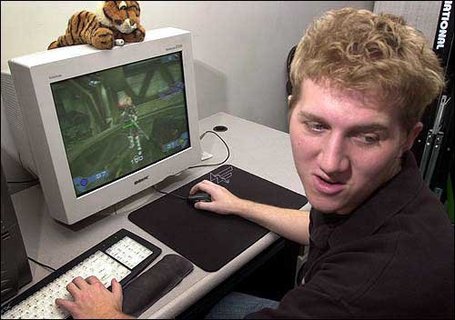 After graduating high school, I attended NYU. I've lived in New York ever since, flagellating my bank account with rent payments and the criminally overpriced toilet paper from the deli across the street.

The manager of my previous apartment was kidnapped and extorted by a Chechen War mercenary who once boasted of "[having] his own brother killed. The manager of my current apartment lives on Long Island. I think. I'm not really sure where they live actually, but I imagine it is very large, and that the toilet's are made of exotic emeralds and linens, which themselves are flushed down larger toilets.

My five favorite games in no particular order are Earthbound, Just Cause 2, Drop 7, Bushido Blade 2, and Mario 64. I also hold a special place in the old blood pumper for Chip 'n Dale: Rescue Rangers on NES.

Though I didn't include any on the above list, I tend to enjoy FPS games. The goofier the better. Last year, I had a secret affair with Metro 2033, and I'd appreciate you keeping that between us.

If I had my way, I would wear blue jeans and a white t-shirt every day, but my wife tells me I am not and will never be Bruce Springsteen. She is wrong.

Like many of fellow Millennials whom make their salary on the internet, I enjoy podcasting, tweeting, and dropping hot .gifs.