Can Logitech's little Bluetooth speaker live up to the hype and compete with the Jawbone Jambox?

When Logitech announced its new Mini Boombox back in November, our advice was to give the portable speaker a listen before handing over your money. The advice wasn't due to any personal vendetta against Logitech, rather, it had everything to do with company's claim that the tiny speaker could offer an "immersive sound experience" for just $99.99 — a quote attributed to Azmat Ali, Logitech vice president of tablets and mobile in the accompanying press release. That's a bold proclamation for a device measuring just 4.55 x 2.8 x 2.28 inches and weighing half a pound. Fortunately, we received a unit in-house for review allowing us to put it head-to-head with our favorite battery-powered portable speaker, the Jawbone Jambox.

You can tell a lot about a piece of consumer electronics by the care used in its assembly. So, look at that Mini USB cut-out, just look at it — that was my first impression of the device. Wait, back up, my first impression began at the unboxing where the Mini Boombox was found ensconced in the kind of chintzy plastic that would make a fast-food-beverage top blush with supremacy. Once free of its packaging waste, I was taken aback by the feathery weight of the speaker as I began removing the massive sticker positioned along the top of the device to indicate the location of the invisible capacitive-touch buttons. However, instead a clean removal, the sticker left a nasty residue which had to be rubbed into tiny beige balls of glue, skin, and paper, and then surgically plucked from the device. It was then that I noticed the mangled USB cutout.

The penny saved on the $99.99 price tag doesn't justify these kinds of manufacturing and assembly shortcuts. The out of box experience left me completely underwhelmed and the speaker hadn't even been turned on.

The Mini Boombox features two speaker drivers powered by a 10-hour rechargeable battery that receives its electrons courtesy of a supplied USB charger or laptop jack. Controls include an on / off switch, a 3.5mm AUX input, and a glowing red panel of capacitive buttons along the top that activate (and illuminate) with a touch for music and Bluetooth call control. The Mini Boombox supports the A2DP and HFP 1.5 Bluetooth profiles for audio control and hands-free calling support, respectively, and a square Logitech logo on the front of the speaker glows blue when paired with a Bluetooth device. 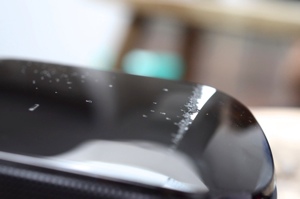 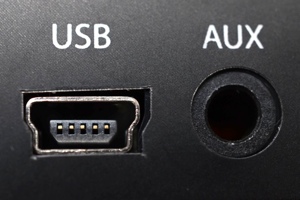 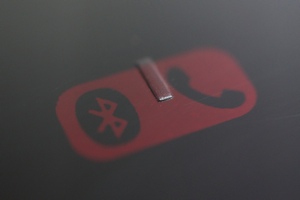 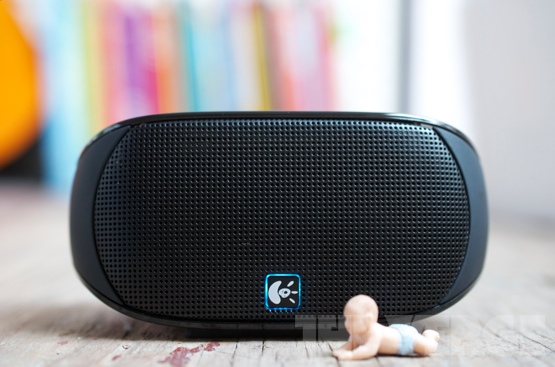 Once the capacitive touch panel is activated — sometimes taking up to a second to respond to the first touch — you can control the Bluetooth audio features on your phone (we tested with an iPhone 4 and Lumia 800) like volume, play and pause, and track skipping backwards and forwards. A double tap of the phone / Bluetooth icon initiates a call to the last known dialer and a single tap hangs up. Speaker phone quality was decent and offered far more amplification than any smartphone so no complaints there. But the true test of any speaker isn't voice quality.

Anxious to test the bass, the first music track I streamed to the Mini Boombox was Karen O belting out her Led Zeppelin cover of Immigrant Song under the tutelage of Trent Reznor and Atticus Ross. After a few seconds of emotional buildup, the rush of sound caused the Logitech to bounce across the table with audio so piercing that I reflexively lurched for the controls in an act of self preservation. Sound from the Mini Boombox begins distorting at anything above 50 percent volume. So, while it's a very loud box to be sure, it's also unlistenable at such high levels. In fact, the speaker would have progressively convulsed itself right across the room if the noise was bearable for anything longer than a few seconds. The Jambox, however, while not as loud, doesn't distort until reaching about 80 percent of top volume, yet remains mostly stationary thanks to its extra weight and rubberized coating that spans the length of the base.

Regardless of volume, the Mini Boombox was easily bested by the smaller Jambox in every genre especially at the low end. But even treble friendly recordings like Shelter from Birdy sounded too harsh on the Logitech speaker. Audio from the Mini Boombox was simply flat and too treble-heavy for our tastes without any hint of nuance or stereo separation. In fact, we find it very difficult to justify the $99.99 when the Mini Boombox offers only a modest (but definitely noticeable) bass improvement over the speakers integrated into most full-sized laptops. $50 might be a better price for the Mini Boombox especially if you only wanted to use it for gaming, although even at that price I still wouldn't be tempted due its plastic bulk and poor build quality.

On a positive note, the battery managed to last a few days under fairly heavy testing with Bluetooth streaming, often at full volume, easily living up to the claim of 10 hours. 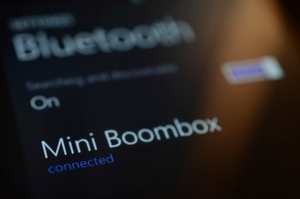 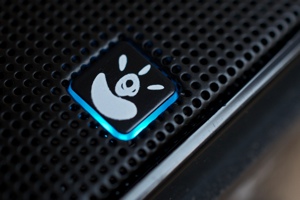 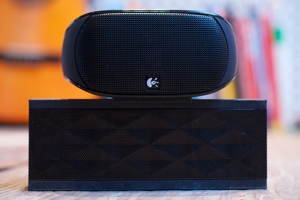 The Mini Boombox is simply not worth $99.99 in our estimate. The impeccably built Jawbone Jambox costs $199 (or less: it's been on sale for $150 recently) and provides a far more enjoyable listening experience that can be personalized and expanded with additional features. Better yet, the Jambox can, at times, live up to Logitech's hyperbolic claim of creating an "immersive sound experience" especially when listening to music tracks recorded for three-dimensional binaural listening. A Bluetooth speaker is a luxury, so our advice is to save up for a Jambox and relish the experience instead of loathing the Mini Boombox.