Another firmware update was released for the Asus Transformer Prime that attempts to fix the documented GPS lock-on issues as well as improving touch response and better camera focusing.

We've really enjoyed our time with the Asus Eee Pad Transformer Prime, but it seems some users haven't been so lucky. GPS lock-on has been confirmed as suspect, and while Asus released a firmware update last week to improve stability, there's another over-the-air patch making the rounds. This update to build 8.8.3.33 purports to "enhance GPS speed" by automatically downloading satellite locations tables over Wi-Fi; other changes include improved touch response and better camera focusing (an issue we took note with in our review). Strangely enough, the details for this firmware only appear to be posted on Asus's Germany Facebook page; the support page for the Transformer Prime only has the previous update (8.8.3.29) available. We expect that'll change soon, but in the meantime we'll be updating our Transformer Prime to see if we have the update and if the GPS lock-on and other issues have been improved. We'll report back with what we find right here — stay tuned.

Update: Firmware 8.8.3.33 downloaded and installed on our Transformer Prime without a hitch, and the camera focus was indeed significantly improved. GPS lock-on was a bit of a mixed bag, though — it locked onto a GPS quicker than our Galaxy Nexus in one test, but in another the Galaxy Nexus locked on to six of eight satellites, while the Prime only managed one or two out of five. Overall, despite continued GPS issues, this firmware update seems to be worth installing. 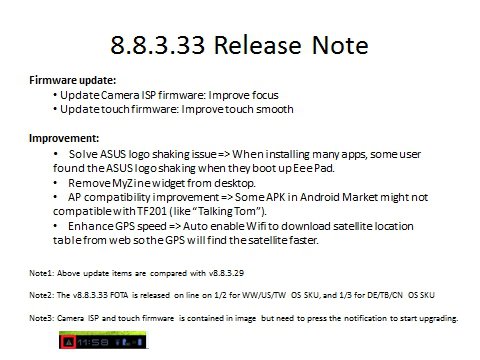