Simple home security is a great idea waiting for a great implementation — is the Dropcam HD up to the task?

Simple home surveillance is an appealing idea — who doesn't want to be able to check on their kids while at work or make sure the house is still standing while on vacation? But unfortunately, none of the solutions have actually been very appealing — the options have either been too expensive or captured low quality footage.

Dropcam aims to find a middle ground with the new $149 Dropcam HD, one of the more powerful gadgets to hit the do-it-yourself home surveillance market. It lets you set up a camera and check on it from almost anywhere, and also adds DVR functionality, sharing options, two-way audio, and 720p video to the mix. Is now the time to spring for some basic home surveillance? And how’s the peace of mind? Read on for the full review.

The Dropcam HD is two pieces — the camera and its stand. The camera itself is about the size of a York Peppermint patty (though decidedly less delicious), and contains all the Dropcam hardware. The round, metallic silver base has a hinge that holds the camera firmly in place. I like the modular aspect of it, actually — it allows you to use the Dropcam without the stand (for instance sticking it to a wall) and it makes the camera a lot easier to disguise. The stand tilts 180 degrees, though, so you should be able to point the Dropcam in just about any direction without much DIY effort.

There are no batteries inside the device, so it needs to be plugged in at all times. That makes hiding the camera a little harder and limits its possible placements — the included long USB charging cable helps, but the Dropcam HD still isn't easy to hide. The Avaak Vue Zone, a competing solution that starts at $200 and uses a base station and satellite cameras, is a lot more versatile since the cameras are tiny and run on batteries, but it's a more expensive system without any of the set-it-and-forget-it aid of the Dropcam. 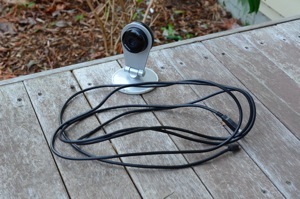 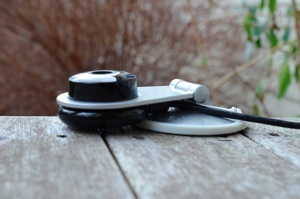 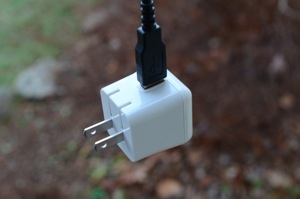 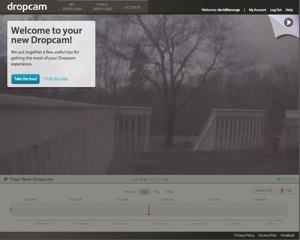 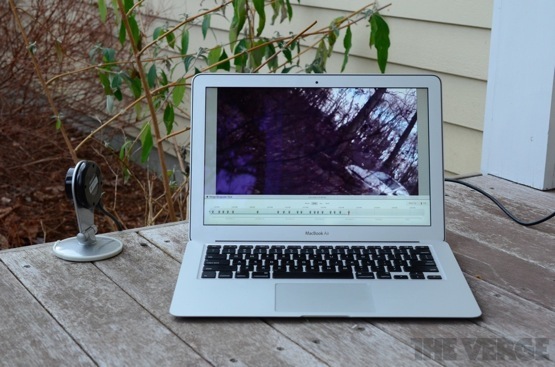 Readying the Dropcam HD is a remarkably simple process. Most of the initial setup is done on your computer, which is a little inconvenient but is ultimately much easier than trying to do it through an app or on the device itself. You plug the camera in via its Micro USB port, and set up the camera through the browser. Connect the camera to your Wi-Fi network, set up a username and password for your account, and five seconds later you should be watching the Dropcam's footage. You'll have to go through this setup again every time you change your Wi-Fi password or connect the camera to a new network, but that's probably unlikely to happen very often with this kind of stay-at-home gadget.

One recommendation while you're setting up: check the camera a few times, until it's getting the exact picture you want. Since the hardware is modular, it's easy to slide the lens in at a funny direction or at an odd angle — I did a few times — and though you can correct some placement issues later, that's not one of them. It's a little annoying to do, but it's worth a bit of back-and-forth at first to make sure it's pointed the right way. 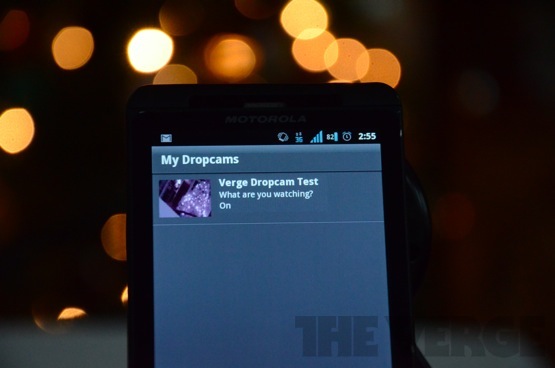 Since the Dropcam HD uses AC power, it's always on — there's no waiting period while the camera fires up and starts streaming, which is a nice advantage over products like the Vue Zone. Just head to Dropcam's site, input username and password, and poof — there's the camera's live feed (there's a delay, but more on that below). If you unplug the Dropcam and then plug it in again, there's about a 25 second delay before the browser shows the stream again — something to keep in mind if you plan on moving it around often.

One of the coolest features of the Dropcam is its DVR functionality, available to paid customers. For $9.95 / month, you get access to the last seven days of footage from your camera, with pins in the timeline every time the camera detected motion. The latter is one of my favorite things about the Dropcam: the ability to avoid all the hours of motionless silence and just see the few spots where something interesting happened is a serious time saver. You can also easily download a clip from the past, up to an hour long, in case you need a more permanent archive. For $29.95 / month, you bump up from seven days of archived footage to 30. All the other features are available on the free account, though; the paid versions simply add the DVR functionality.

Video quality was seriously disappointing, especially for a product with "HD" in the name. The company claims the camera records and streams 720p video, but that was a far cry from my experience: on my home Wi-Fi network, which was testing between 13Mbps and 15Mbps download speed and 5-7Mbps up, the video from the Dropcam was consistently so grainy and pixelated that I couldn't make out the face of the person in the video unless they were right next to the camera. There was also a solid 6-10 second delay on the video, which means by the time you see someone enter a room and try to talk to them, they might already be gone. Things didn't even get better on the 50Mbps / 50Mbps connection at the Verge offices. Predictably, lighting affected the video quality a lot more than connection speed — if your camera's pointed out into broad daylight, it's much easier to see and use than when it's indoors — though fortunately, the camera can see a bit even in pitch dark thanks to a cool infrared feature.

I liked that the Dropcam HD has two-way audio, so you can both hear and be heard through the camera. You can imagine the uses: greet your dog when it comes in the door, shout "close the door" to your kid, and the like. What I don't like is the audio performance. The speaker on the camera is so anemic that you can barely hear that there's sound coming out, and the sound is hard to hear because it's so scratchy. If you're a foot or two away from the camera — say, you're using it as a baby monitor — it more or less works, but any greater distance and you might as well not have audio. It works better in the other direction: the microphone is pretty clear, and sound came through relatively loudly as long as I was close to it — after a few yards, I couldn't hear much of anything. 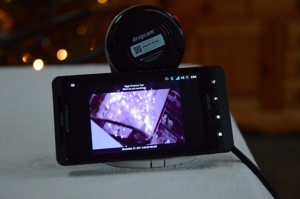 It's a good device, but not an advanced one

The Dropcam HD provides solid, basic home security and monitoring — making sure your power’s on and your house is still standing. It’s super simple and reliable, but thanks to mediocre video and audio quality, it doesn’t quite achieve the high-quality, low-price combination that makes it so alluring on paper. If you want a more robust system, the Avaak Vue Zone works quite well, and the HD isn’t enough of an improvement over older Dropcam models, like the Echo, to be worth the premium. Dropcam’s moving in the right direction with the advanced features and monitoring functions, but the features aren’t quite yet baked enough to take home surveillance mainstream.