The Boxx electric moped has been shown at the Portland Auto Show, and at less than a meter high it's designed for storage in small spaces. We've yet to see someone ride it, though...

A new electric scooter concept was on show for the first time at the Portland Auto Show last week, and it's unlike any motorbike we've seen before. The Boxx stands at a meter tall and less than 30cm wide, making it easy to store inside your apartment, though the 120lb (about 55kg) weight might make getting it up the stairs a challenge. Despite this heft, if you've added the second battery it's expected to have an 80-mile range at up to 35 mph. Designer Eric Vaughn is possibly better known for his work on TV series Stargate, though has collaborated with a number of motorcycle engineers on the internal workings of the moped. Aside from the unique looks, the Boxx has a couple of extra features which could prove invaluable — all of the controls are modular, meaning that faulty control units can easily be swapped out, and there's also a laser projection system onto the road surface to alert drivers of how much space you need. 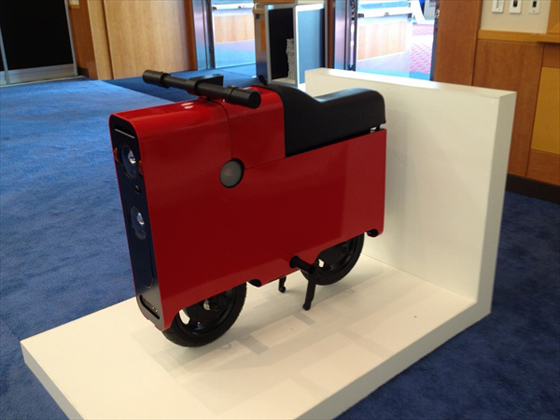 We've yet to see someone sat on one of the bikes, let alone riding it, which makes us wonder just how practical this miniaturized bike is. While the Boxx website is currently taking orders for $3,995 apiece, there's no shipping date given. However, Vaughn told the Portland Tribune that he plans on forming a sales team in Q2 2012, so we wouldn't expect buyers to receive their Boxx much before then.