A roundup of the reviews of the AMD Radeon HD 7950 finds the card capable, but slightly over-priced

AnandTech, Tom's Hardware, Tech Report, PC Perspective, Tech PowerUp, and Hard OCP have all reviewed the AMD Radeon HD 7950 and are generally impressed by the card's performance. Shrinking the die process to 28nm has helped to cut power consumption, and like the 7970 before it, the 7950 should prove very responsive to overclocking. Initial tests suggest the 7950 can attain similar results as its elder sibling with overclocking, and there are already a few manufacturers offering pre-clocked versions.

CrossFire performance looks stellar, adding an incredible 98 percent over single-card performance in one test and matching or besting Nvidia's SLI offerings for the most part. It's worth mentioning that some reviewers had problems running two cards in CrossFire mode, but it's early days for the card, and updated drivers should sort out the issues eventually. The main issue brought up by the reviews is the card's $449 price point, which puts it directly in competition with Nvidia's year-old GTX 580, without blowing it out of the water in the benchmarks. The consensus was that the card could do with coming in a little cheaper to make it a truly compelling purchase. That said, Tom's Hardware summarizes the card as a "cheaper, cooler, and more power-friendly alternative" to Nvidia's card. If you're looking for in-depth analysis, as well as a near-infinite number of charts and graphs, you can check out all the reviews in the source links below. 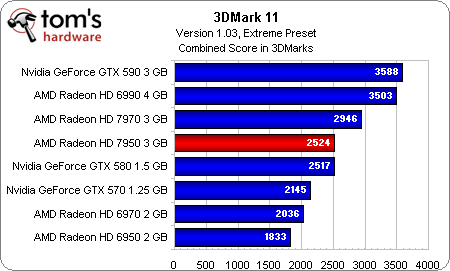