Valve's Steam gaming service has reached a new record for concurrent users, with over 5 million logged-in gamers around noon on January 2nd.

Even for people who don't identify themselves as PC gamers, the ascension of the Steam game distribution and multiplayer service will hardly have gone unnoticed. Started up in 2003 by Valve, the guys behind the critically acclaimed Half-Life and Portal series, Steam has now passed the somewhat arbitrary, but still very cool, milestone of having five million concurrent users online. The most recent peak value of 5,012,699 was reached around noon on January 2nd, the timing of which can hardly be considered an accident after a December full of Steam sales.

It was only this September that Steam crossed the four million users threshold, so its ability to add another million in the brief period of time since is evidence of some rather nice momentum. Unsurprisingly, Bethesda's The Elder Scrolls V: Skyrim is the most popular game among Steam gamers, followed by multiplayer classics Team Fortress 2 and Counter Strike. All in all, this looks like a pretty great way to start the new year for the supposedly dead PC gaming scene. 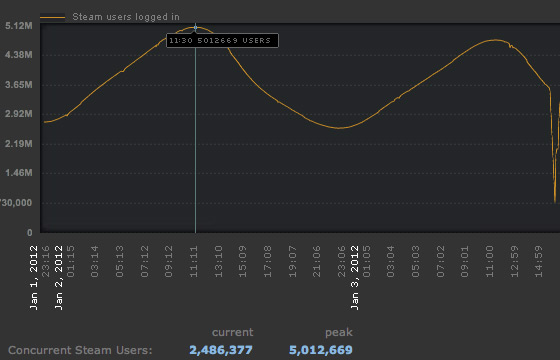