Nokia re-enters the US market with a Windows Phone 7.5 device aimed squarely at first-time smartphone buyers

It’s been almost nine months since Nokia released a carrier-branded smartphone in the US, the Symbian-powered Astound for T-Mobile. That was before the company's sea change — it has come a long way since then, betting its future almost entirely on Microsoft's Windows Phone. The Lumia 710 is Nokia’s second-ever WP device and the first to come out stateside. But unlike the flagship Lumia 800, this one has always been aimed at at the more entry-level consumer, coming January 11th for $49.99 on a two-year contract.

Nokia has an outstanding reputation for hardware design and mobile cameras, which just so happens to be the two places where Windows Phone manufacturers are really able to differentiate from one another. Of course, the lower price tier typically means sacrifice. How does it hold up? Read on to find out.

Whereas my colleague Vlad had effusive praise for the N9 / Lumia 800 design, the 710 design is decidedly more common. Solidly-built and measuring 4.69 x 2.49 x .49 inches, it’s a little bit thicker than its similarly-sized Windows Phone counterparts (the HTC Radar 4G for T-Mobile and Samsung Focus Flash are both .43 inches thick). At 4.4 ounces, it’s within .33 ounces of the aforementioned smartphones — you probably won't notice the weight difference without.

The front of the device is very glossy and prone to fingerprints, as is the case for most phones these days. Our review unit is black, but we’d probably opt for a white finish so those prints wouldn’t be so apparent. Unlike other phones, however, the standard Back, Windows, and Bing search buttons are actually one long physical button — spaced far enough apart so as not to make any erroneous presses, and plenty clicky. After so many Windows Phones with capacitive buttons, this was actually quite refreshing.

Along the right rim going up, there’s the dedicated camera button and volume rocker — both sturdy and responsive. Along the top from right to left is a power button, a 3.5mm headphone jack in the middle, and oddly enough, a Micro USB port — not the typical location, but you get used to it. The removable battery cover has a smooth matte finish, and yes, Nokia will offer different colored back panels for accessorizing (glossy front of the phone is still only black or white, though, so choose wisely). Also on the back? Two more instances of Nokia insignia — a shiny logo near the 5-megapixel camera and single LED flash and "Nokia 710" printed in small letters under the speaker grill — for three in all. Just in case you forget. 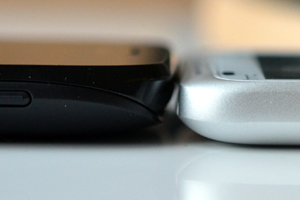 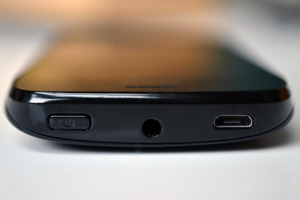 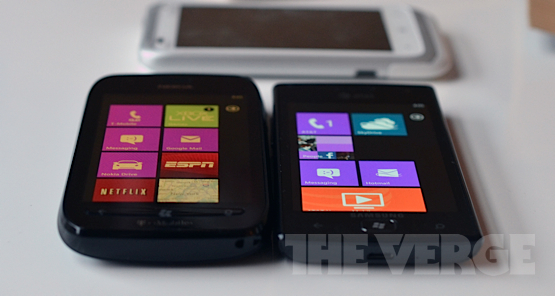 If you’re familiar with other Windows Phone devices, the 800 x 480 resolution should come as no surprise. The Lumia 710’s 3.7-inch screen size aligns it again with the 3.7-inch Focus Flash and 3.8-inch Radar 4G. Where each of these differentiate, however, is the screen technology. The Lumia 710 has a "ClearBlack" LCD, which is what Nokia calls its proprietary display technology. It falls somewhere in between the Focus Flash’s Super AMOLED Plus and the Radar’s Super LCD — strong colors from the front, decent black levels, and unlike AMOLED, strong discoloration when viewed off center. It’s still readable from more extreme angles, but it also similarly turns all purples to a neon pink. Like I said earlier (and as you can see clearly in the video), the front is very prone to fingerprints. 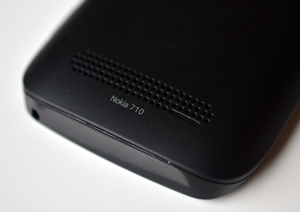 A 1.4GHz Snapdragon MSM8255 CPU and 512MB RAM are a Windows Phone staple; they are also the same specs as the higher-tier Lumia 800. In other words, it makes for a similarly snappy experience as other new WP7.5 releases. The battery is slightly smaller than the Lumia 800’s (1300mAh vs. 1450mAh), and likewise I was getting results that were just a hair less than what Vlad reported in his review of the flagship phone. I was consistently getting a full day of moderate use (push email, web browsing, photo and video capture, and the occasional game of Burn the Rope). Nokia lists 9.5 hours of 3G talk, 335 hours of 3G standby, 55 hours of music, and 6.5 hours of video.

Call quality, quite frankly, is some of the best I’ve had on a Windows Phone yet (and high up there for smartphones in general). I spent an hour making various calls while wandering around New York’s Lower East Side, and the call quality was clear throughout without a single dropped call — not necessarily indicative of everyone’s experience but certainly not what I’m used to on my AT&T iPhone 4. The phone runs on T-Mobile’s "4G" network, which is to say 14.4Mbps HSPA. I’m not going to get into a 4G diatribe here (thank you, Chris), so I’ll just say it’s notably faster than 3G but nowhere near LTE. Sadly, just like the Lumia 800, Nokia has removed the Internet Sharing function, which turns your phone into a mobile hotspot — that may return in a firmware update, but at this point, I wouldn’t get your hopes up.

As to be expected in a lower price tier, the Lumia 710’s 5-megapixel camera (with 720p HD video support) and 28mm f/2.4 lens does not have the same oomph as the Lumia 800’s 8-megapixel sensor and f/2.2 lens. I know I’ve brought up this comparison ad nauseam already, but even under scrutiny, the 710’s photos are on par in quality with the Radar’s and Focus Flash’s 5-megapixel snapshots. I did notice some variation in saturation and a wider angle of view, but it’s very slight. Basically, if you’re that discerning of a photographer, you’re probably using a dedicated camera, anyway. There is no front-facing camera, so if you're keen to try mobile video chat, look elsewhere. 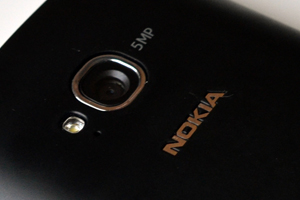 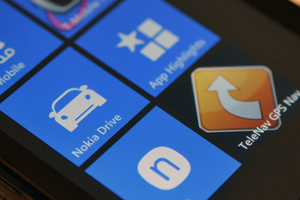 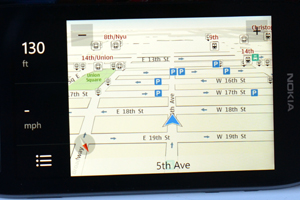 This is the third Windows Phone handset I’ve reviewed in the past few months, and the fourth I’ve used as my primary phone for any given period of time. Microsoft wanted the platform experience to be largely identical across all hardware, and to its credit, it really is. It’s not for everyone, but I do like the aesthetics of the Metro UI. In use, however, it’s still not at the level of its Android or iOS peers. If this is your first smartphone then it probably won’t bother you. If you’re coming from one of the aforementioned platforms, however, multitasking here might seem lacking and Bing maps less functional than its peers. The app ecosystem is getting there, but while most of my go-to software has a Windows Phone version (Foursquare, Yelp, IMDb, Twitter) across the board I find it takes longer to get the same actions done. As always, I refer to our Windows Phone 7.5 Mango preview for more detail.

While it’s been said Nokia has more freedom than others to tweak Windows Phone, the company has yet to invoke that right. The only addition is a Nokia Blue theme, which is a more navy blue hue than the bright blue icons. (HTC also bundles its own theme color.) What sets the Lumia 710 apart is Nokia’s suite of apps. It’s a mixed bag, with the best being the Navteq-powered Nokia Drive — turn-by-turn navigation that works offline and comes with a range of voice options and some clunky interface choices. Other apps include the self-explanatory App Highlights and my personal favorite We Care, whose sole purpose is to provide privacy policy and related legalese.

Meanwhile, T-Mobile pre-installs TeleNav (for those keeping track, that’s a third way to get driving directions after Bing and Nokia Drive) and T-Mobile TV.

The Lumia 710 comes at an awkward time for the consumer electronics industry. It launches quite literally during CES, the tradeshow where every major smartphone manufacturer announces its US lineup for the weeks and months to follow. Nokia will be there, too — rumors suggest it’ll unveil “Ace,” a new flagship Windows Phone device for AT&T’s LTE network. The Lumia 710 is an entry level phone for consumers without patience or foresight. It’s for those who have already decided on T-Mobile’s network, have no affinity for Android, and probably think the HTC Radar 4G looks awkward (not an unfair point) — and bonus, you can accessorize with different-colored back panels. But even then, the Radar 4G is a better value: it has internet sharing, a front-facing camera (both of which Lumia 710 lacks) and is virtually free on contract (at least when purchased online).
It always feels like a cop-out to say just wait and see what comes out next, but that rings particularly true now. Although it was never built to be an aspirational device, as Nokia's first US product in its new era, I can't help but be disappointed.
Compare this: Lumia 710 vs. Lumia 800 vs. Focus Flash vs. Radar 4G