Fujifilm announced a wide-ranging lineup of cameras for CES 2012 earlier today, but if Mirrorlessrumors is to be believed it was holding back a surprise. The site has the first shot and details of the X-Pro1 mirrorless camera, taken from French magazine Réponses Photo, with an allegedly leaked press release at Wells Fargo. Like the X100 and X10, the camera features a retro, rangefinder-influenced design, with an assortment of physical controls adorning the body. The camera uses a similar hybrid optical viewfinder to the X100 that will apparently shift field of view depending on the prime lens attached. About those lenses — they're made of metal, use Fuji's new proprietary X-mount, and three are currently slated for release: an 18mm f/2.0, 35mm f/1.4 and a 60mm f/2.4 macro. The camera has a large 16-megapixel APS-C sensor, so the lenses will be subject to a 1.5x crop factor. While it looks like they'll be a little bulkier than the X100's fixed 23mm f/2.0 lens, the X-Pro1 will obviously offer a lot more versatility. We'll be sure to let you know if and when we get confirmation of these details. 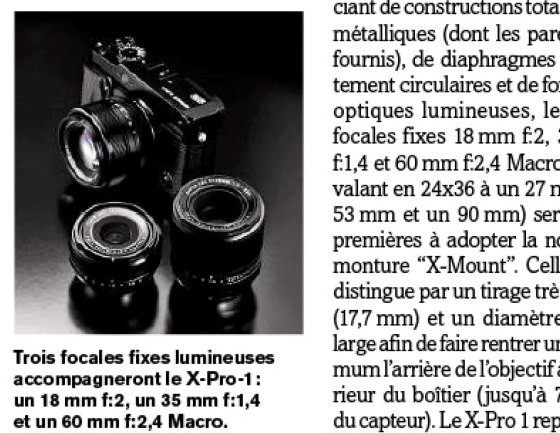 More from this stream Fujifilm X-Pro1: The story so far