US Army-branded gaming peripherals on the way

CTA Digital has announced a range of gaming peripherals licensed by the US Army, with proceeds going to Morale, Welfare and Recreation programs for soldiers. The range includes a backpack, headsets for various systems, and PlayStation Move rifles.

Share All sharing options for: US Army-branded gaming peripherals on the way

The world of gaming peripherals often features the obvious tie-ins — famous franchises, pro gaming teams, and so on — but we bet you didn't see this one coming. CTA Digital has joined up with the United States Army to produce a range of licensed accessories including various headsets, a console-carrying backpack, and no less than three PlayStation Move rifles. There's a Bluetooth headset for PS3 and PC, a wired model for 360, and a pair of "3D effect" headphones for all systems. It's not quite as tawdry an affair as it may first seem — all licensing revenues from the products will go to US Army Morale, Welfare and Recreation programs. No word yet on whether the British Ministry of Defence plans to adopt them in line with its recent game-inspired combat training upgrades. 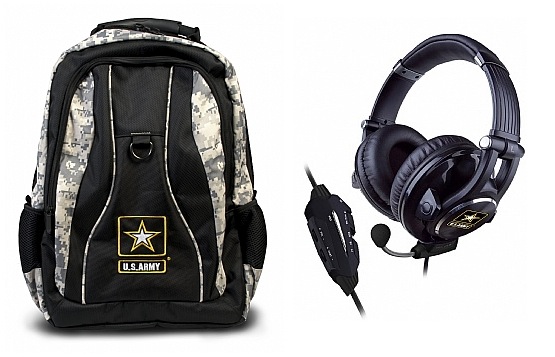