OLPC XO 3.0 tablet: an 8-inch tablet for $100, with Android and Sugar options for the children (update: pictures!)

OLPC XO 3.0 tablet: an 8-inch tablet for $100, with Android and Sugar options for the children (update: pictures!)

OLPC's XO 3.0 tablet for children of the developing world is finally ready. It will have a 8-inch display, a choice of Android or Sugar operating systems, and a outdoor readable display.

It was over four years ago that OLPC founder Nicholas Negroponte showed off images of an XO tablet, and promised it would ship to kids of the developing world in 2010 for $100 each. Obviously that didn't quite happen, but it turns out both the company and the tablet are finally ready. Not only is OLPC is bringing the XO 3.0 to CES this week, it's also getting ready to put the slate into production.

The XO 3.0 tablet doesn't have two screens like the prototype Negroponte described a few years back, but it is built in very much the same way as the XO laptop. It's been designed by Yves Behar, has a rugged case, and can be charged via a hand crank or solar panel. In fact, OLPC's CTO Ed McNierney told us that the two-watt tablet can get 10 minutes of runtime from one minute of cranking. (The cranks will be third-party accessories and won't automatically come with the tablet.)

In terms of raw specs, the XO 3.0 has an 8-inch, 1024 x 768-resolution PixelQi display, which can be read indoors and out, a Marvell Armada PXA618 processor, 512MB of RAM, and will be configurable with either Android or Sugar operating systems. Sugar is OLPC's own Linux operating system, which was designed specifically for kids. "We designed the XO-3 with an open fireware and with open BIOs so it is easy to support multiple operating systems. Countries can choose between Android and Sugar," McNierney said.

And that bit about countries is very important. The XO 3.0, like the XO laptops, won't be sold directly to consumers or parents. OLPC will sell the tablets in bulk to countries who want to ensure their children have computers, and won't produce units until orders come in. So how much will countries like Uruguay and Peru (both of which have deployed thousands of OLPC laptops) have to pay? McNierney and Negoroponte say that $100 promise will actually be fulfilled, depending on a little flexibility. Both told us that the tablet can be configured for as low as $100, but that it wouldn't necessarily have the PIxelQi display (a $100 variant would have a regular LCD) and other more premium components might be sacrificed, additionally. We're currently trying to get our hands on images of the tablet, and you can be sure we will be tracking down the actual machine as soon as we get to Vegas. 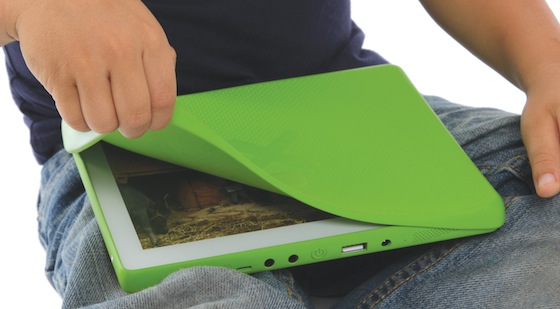 More from this stream CES 2012: the highlights