According to images sent to Engadget, Polaroid will announce an Android Tablet and color e-reader at CES next week.

Share All sharing options for: Polaroid ready to announce Android tablet and color e-reader at CES?

We're expecting to see lots of Android tablets at CES, but we weren't counting on one from Polaroid. However, according to some images a tipster sent to Engadget, we're going to see exactly that, plus a color screen e-reader. The photos show off a tablet with what appears to be a heavily-skinned version of Android (though we can't be sure from the images) with a decidedly iPad-esque homescreen; there's also a number of Aol-related applications pictured, so there might be some sort of content partnership afoot. In keeping with the company's roots, Polaroid's including a large back-facing camera — this tablet might provide one of the better photography experiences we've seen so far (that's a fairly low bar, however).

There was only one photo of the e-reader, with a color screen showing off George R. R. Martin's A Dance of Dragons; only the cover was pictured so we don't yet know what the reading experience is like, nor any other software the device might run. There does appear to be a control rocker and a few buttons on the right of the device, though it isn't clear what their function might be. As for the source photos, they appear to be of promotional posters or banners and not the actual devices — we'll be looking for more on this potential Kindle Fire and Nook tablet competitor as soon as CES gets underway. 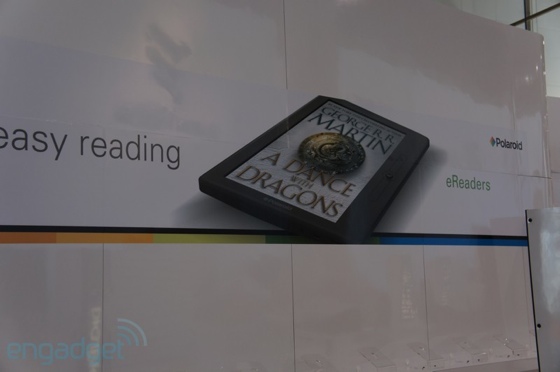