Corning will announce a new version of its Gorilla Glass at CES 2012. This version's headlining feature will be a "thinness that will astound you."

Corning has been teasing a new version of Gorilla Glass for its big CES announcement, but we haven't been sure exactly what to expect "new" in version 2. We've just received these photos from the show floor, which reveal that thinness will be this iteration's headlining feature. The full tagline reads, "The damage resistance you demand, at a thinness that will astound you."

What good does thinner glass do? A few things, we'd imagine: it should be lighter, and it might help manufacturers make more gapless displays (like the iPhone 4 and Xperia Arc). It might also be easier to curve — neither the Nexus S nor Galaxy Nexus are using Gorilla Glass as it is. With mobile devices thinner than ever, every tenth of a millimeter counts, and Corning's impending announcement could be a precursor to even thinner devices at this year's CES. We'll know soon enough. 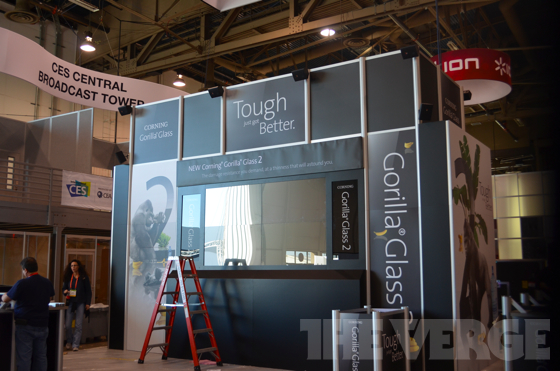