Belkin Thunderbolt dock with three USB 2.0 jacks, one Firewire 800, one HDMI, one Gigabit Ethernet, one 3.5-mm audio jack, and a pair of Thunderbolt ports shipping this summer.

Share All sharing options for: Belkin's Thunderbolt Express Dock finally goes on sale in September for $299

Belkin's blowing the dust off its Thunderbolt Express Dock at CES and giving us a September 2012 release date for the US. You might recall that we first saw this dock — aka, the port replicator every MacBook Air owner has been waiting for — at IDF in September. Once again, we're looking at three USB 2.0 jacks, one Firewire 800, one HDMI, one Gigabit Ethernet, one 3.5-mm audio jack, and a pair of Thunderbolt ports: one for carrying 10Gbps bi-directional data to your Thunderbolt-equipped laptop and the other for daisy-chaining another Thunderbolt device. Sorry, no USB 3.0 this time. Price is high at $299, but at least it's cheaper than the $999 Thunderbolt dock sold by Apple.

Update: Belkin just sent us new images of a clearly redesigned dock from what we saw previously at IDF. 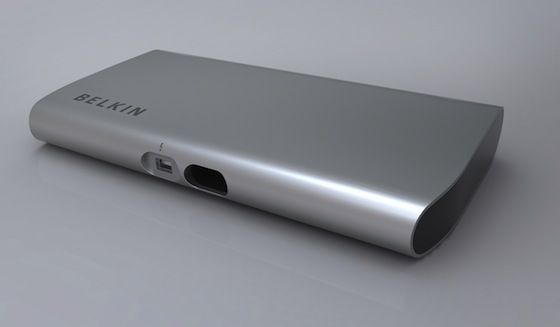