All-out messaging war between Apple and Facebook heats up

The battle to be the next BBM is just getting started

Last week, as part of new versions of iOS and OS X, Apple consolidated every iPhone user's Apple ID and phone number, merging them into one ubiquitous profile. These profiles can chat over iMessage, which is Apple's take on BlackBerry Messenger, except it works on both computers and on mobile devices. This means that you can text a friend's iPhone from your Mac. On the whole, sending messages works great (aside from some goofy visual bugs in the Mac app itself), and requires very little set up. So at last, the average human being can "text" from a computer.

At last, the average human being can "text" from a computer

Several other companies have been chasing the holy grail of messaging synced across all your gadgets, but none of them have made it as easy as Apple now has. Google Voice has for years been letting you text from a computer or mobile device, but you have to get a new phone number, and there's no MMS or read receipts. Facebook has also been pushing messaging on desktop, but beats Google with its excellent Messenger apps for both Android and iPhone. Facebook messaging works great, and won't even buzz your phone with a new message if you're logged in on your computer like iMessage will. But, it hasn't caught on as a de facto way to communicate short-form messages, and neither has texting with Google Voice. So what's the difference? Neither service is attached to your phone number (perhaps the most important unique identifier any of us possess in this day and age), and both require you to set up service or download an application.

One of the things that made BBM so wildly successful (and was perhaps one of the main drivers behind the BlackBerry boom a few years ago) was that a BBM PIN came on your phone, and didn't require you to download any apps. It "just worked," and made instant messaging with friends from a mobile device feel native. BBM was one of the first data-based instant messaging platforms on mobile that included read receipts, actual smiley graphics, group messaging, and attachable media. Unfortunately, Research In Motion offered no BBM client for computers, which is a problem because many of us spend our days in front of computers with large keyboards we'd just love to use for chatting with friends. So we inevitably email friends while at work, or use chat apps with stagnant protocols (ex. AIM, Google Talk), which lack features like read receipts and conversations that can be synced across different clients. 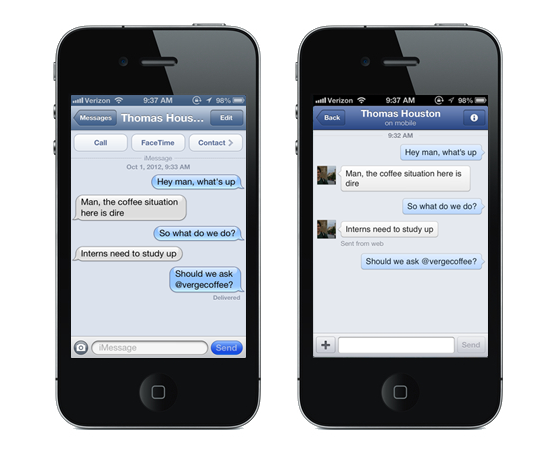 With over a billion users, Facebook is in the best position to challenge Apple. It's been building its messaging team for years: the company got started when it purchased Beluga, a mobile messaging outfit that now builds its Messenger apps. The company integrated messaging directly into texting conversations on Windows Phone years ago, and last week pushed out an update to its Android app that threads Facebook messages and texts from your phone inside one persistent conversation. Facebook Messenger for iPhone will never be able to boast this feature (due to current restrictions in iOS), but does offer super-simple group chats, the ability to ping your location to a friend from inside the chat window, and new chat bubbles like you might find in a texting app (hint, hint). You can even silence notifications from a specific conversation or person for a specific period of time. And of course, all of yours chats are archived, which can be really useful (but also scary, at first). Facebook has been rapidly updating its Messenger platform, and shows no signs of stopping.

Facebook has been very rapidly updating its Messenger platform, and shows no signs of stopping

Feature-wise, the Facebook Messenger and iMessage platforms are pretty neck and neck, but each offers a few distinct advantages. Most importantly, Facebook intelligently doesn't push messages to your phone while you're chatting on its website, while Apple does. It's pretty obnoxious having all your iOS devices light up at once. Additionally, Facebook Messenger is much more flexible, working on Windows, Mac, iOS, Android, Windows Phone, BlackBerry, and more. Apple's advantage is once again the phone number, which really ceases to become a phone number (since your iMessages are routed through Wi-Fi or your phone's data network), and is instead just one of many identifiers tied to your Apple ID. Apple's platform ships out of the box on its quite-popular devices, works automatically (when you text a friend with an iOS device or Mac), and doesn't ask you to hand over your texts to Facebook — an idea that's scary for many, though the company has never suffered a data breach of user data.

It doesn't matter that iMessage is really just a glorified new instant messaging platform. What matters is that for the average person, texting from a computer is now within reach. The average person can start chatting on one device and pick up the same conversation on another. A ubiquitous and continuous out-of-the-box messaging experience is here that's easy enough for anyone to use. If we're prepared to give up our archaic phone number identities in favor of identities tied to our names (like on Facebook), we might be getting close to messaging nirvana: the point where all your short-form communication, like all your long-form communication, is synced between all your devices.

Until then, Apple's iMessage platform will spread to the hundreds of millions of Macs and iOS devices out there, becoming the platform BBM always should've been. But inevitably, Android and Windows, the predominant desktop and mobile platforms in the world (by market share) will get left out. iMessage's perceived ubiquity is mainly a result of the fact that iOS is everywhere, but Facebook's trump card may be the fact that it's much closer to matching SMS's platform independence. And ultimately, it's going to take platform independence to dethrone SMS in some distant and wonderful future.