'What does this mean??' The absurd pleasures of HeTexted's terrible relationship advice

'Hot or Not' meets 'Cosmo' with hilarious results

By Adi Robertson@thedextriarchy Oct 11, 2012, 10:02am EDT
Source HeTexted, The Pervocracy, and Cosmopolitan

Share All sharing options for: 'What does this mean??' The absurd pleasures of HeTexted's terrible relationship advice

Just as certain weapons are banned by the Geneva Convention, it’s clearly time to accept that we as humans are incapable of using some communication technologies responsibly. At an earlier point, I wouldn’t have classed the humble SMS as one of them. That, of course, was before HeTexted. Managed by a trio of "bros" and dedicated to letting women post and analyze men’s text messages, it’s full of ambiguous gems like "I like you (kind of)" and "you’re a big goober," coupled with solemn, slightly manic overthinking of words that were obviously dashed off in seconds. Some posts are sad, others are bizarre, and all are treated like an intercepted enemy message to be decoded.

Traditionally, relationship advice columns mimic the hierarchies of old media: send in a letter describing your problem and get an expert response published for a large audience, whether the writer is Dear Abby or Dan Savage. More recently, crowdsourced discussion boards like Ask Metafilter have transferred the power of experts to everyday people. But HeTexted, whose bros refer to themselves respectively as the "Dude Whisperer," the "Nice Guy," and the "douchebag with a short attention span," is something different. Instead of detailed descriptions of problems, the users (apparently straight women) post text messages from men, adding a quick description of what worries them. From there, viewers read the texts and determine whether the sender likes them. Years ago, Hot or Not let overconfident or masochistic users put their looks to the test. Now, they can do the same thing to their relationships. 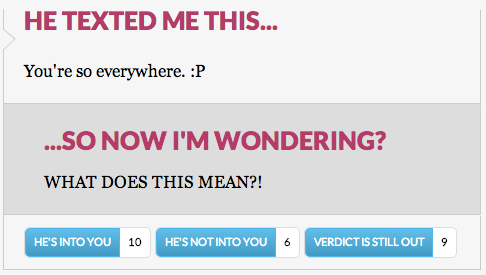 While there is a commenting system for HeTexted, it’s buried below Pinterest, Twitter, and Facebook links. The focus of the site is its voting tool, which prompts users to bluntly tell the poster that the guy is "into you", "not into you," or that the "verdict is still out." While traditional advice-seekers might write about a cheating boyfriend or nasty breakup, users on HeTexted are more interested in parsing a single emoticon or a half-finished sentence peppered with misspellings. Those who discuss more complex topics, like how to get revenge on an ex-boyfriend, are helpfully informed that the man in question is not into them. 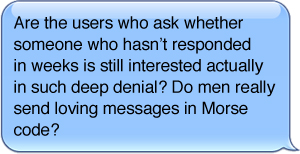 It’s easy to see HeTexted as the microform, monetizable evolution of the advice column: users spend a couple of minutes posting a screenshot, only to have hundreds of others spend a couple of seconds clicking a button to give advice or share it. Texts like "Good morning beautiful! Hope you have a great day < 3" are dissected ad-nauseum, with commenters alternately proposing that the man is casually interested, playing the field, or gay. Almost all content is user-generated (though the bros take private questions and will occasionally contribute jargon-filled insights like "FUTURE STAGE 5 CLINGER"), and it’s never clear who is serious and who’s just playing to stereotypes. Are the users who ask whether someone who hasn’t responded in weeks is still interested actually in such deep denial? Do men really send loving messages in Morse code? Does anyone think that Twilight is a good date movie?

But looking past the format, the assumption that analyzing minutiae is the key to dating isn’t new. It’s based in the mind games of guides like The Rules and Cosmopolitan magazine, which advocate endless relationship close-reading and almost total silence. The cardinal sin for a woman in this world is to ask her friend or significant other what he’s thinking — or to volunteer her own feelings — because the baseline assumption is that this will scare men off by making her seem clingy or emasculating. The result is advice that smacks of astrology (the kind of dog you own determines your dateability) or desperation (your significant other really loves you if "he stands right next to you in public"). 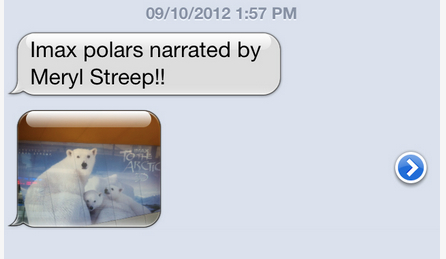 It’s not much of a leap from reading about what color of nail polish will attract the most committed boyfriend to over-analyzing a six-word message about polar bears. When you’re not allowed to ask questions, the best you can do is wonder plaintively online if "I love you but I have a tendency to screw up relationships" actually means "I’m leaving you." The majority of inquiries on HeTexted, whether sent seriously or not, could be resolved by just responding to the guy.

It’s certainly fun to read the endless deliberations on HeTexted, even if a good part of that is the sheer relief that you’re not — at that moment — the one being tempted to do the same kind of overthinking. At the same time, it’s hard not to feel like relationships would be improved by making it easier to have a conversation rather than a series of miniature missives. That is, at least, my reasoning for shifting all future romantic communication to instant message.