Sharp has definitely seen better days, but the one ace it’s always had up its sleeve is incomparable display technology, with its CAAC-IGZO- and CG Silicon-based panels in particular offering some record-breaking pixel densities. At NTT Docomo’s Winter model unveiling today we got to spend a few minutes with the world’s first cellphone with an IGZO-based LCD — Sharp’s 4.9-inch Aquos Phone Zeta SH–02E — and while its 720x1280 resolution (pictured below) wasn't anything special, it heralds some important advancements for mobile devices. 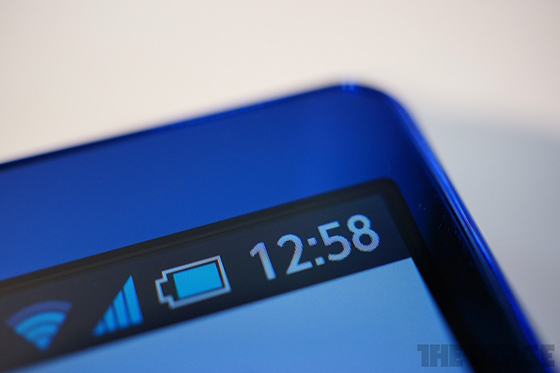 If you haven’t heard of it by now, IGZO stands for indium gallium zinc oxide, a semiconducting compound that Sharp uses to make the thin film transistors (TFTs) — the tiny switches that control a display’s subpixels. IGZO TFTs offer a few important benefits over the most common material, amorphous silicon, including the prospect of higher pixel densities, lower power consumption, and improved signal-to-noise ratios in touchscreen applications.

Run of the mill display, but impressive power efficiency

Unfortunately, none of these benefits were plainly obvious to us when we picked up the SH–02E. We saw CAAC-IGZO displays at Sharp’s event in June with an insane 498 ppi, and this phone’s 300 ppi panel was just not that impressive in comparison. Likewise, using our fingers to write on the SH–02E’s screen (typically a signal-to-noise minefield), we didn’t notice a huge reduction in missed strokes, although a more rigorous head-to-head comparison with a conventional touchscreen is probably warranted. The most impressive part of the demo was an installation emphasizing the IGZO-based display’s power efficiency — it used only a quarter of the power of its competitor when idle, and about 25 percent less during active use.

In short, the world’s first phone with an IGZO-based display is a bit of a letdown. But on the plus side, the high-density IGZO displays that Sharp has been teasing us with are now that much closer to market — something that we can all look forward to.