Microsoft's charms and gestures arrive on Vizio's range of PCs

Share All sharing options for: Vizio introduces touch-capable All-in-One PCs with Windows 8 from $999

Vizio has refreshed its lineup of All-in-One PCs today to include touch screens as well as Microsoft’s latest operating system, Windows 8. The displays on the revised machines now feature 10-point multitouch capabilities, although the resolution remains at 1920 x 1080 for both the 24-inch and 27-inch models. The move will allow users to take advantage of the touch-friendly interface and gestures that feature heavily in Windows 8. Just like its previous computers, Vizio will be marketing the refreshed models as "Signature" PCs, free of bloatware that typically plagues affordable options. 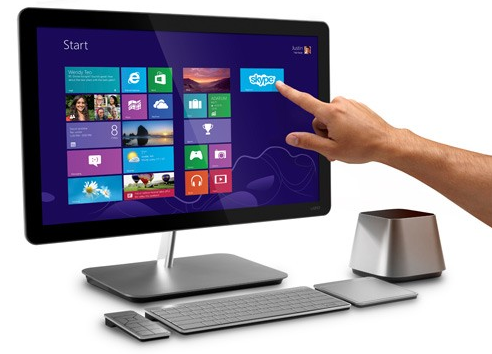 The specifications of the machines remain the same as the originals, however, as does the design. Intel’s Ivy Bridge processors are included in both All-in-Ones, and Nvidia’s Kepler-class graphics also make a return. Pricing for the touch models will be slightly higher, starting at $999, while the regular versions remain at $899. Availability remains a mystery, with the company indicating only that the new All-in-Ones will be available "this holiday." Windows 8 is due to officially launch towards the end of the month, so we imagine availability will become clearer once Microsoft gives the green light to its partners.