Is this shopped? Truth, lies, and art before and after Photoshop

Share All sharing options for: Is this shopped? Truth, lies, and art before and after Photoshop

We humans are insatiable visual gluttons, peering into the empathic peepholes of Flickr photostreams and scavenging the hyperactive junk food gestalt of Tumblr. The internet has practically trained us to gorge ourselves on a kaleidoscopic mess of images. But in the photographic community, there has long been a recurring tension around the boundaries of fact and fiction in this chaotic onslaught of aesthetics.

Try as I might, I can't resist turning to that old copypasta adage which has so often graced the pages of 4chan:

"This looks shopped — I can tell from some of the pixels, and from seeing quite a few shops in my time."

The joke is that the saying usually follows an image that has been manipulated in some obvious and egregious way. More generally though, it's a product of the idea that widely-used software like Photoshop regularly collides with concepts of photographic "truth," that even documentary images are prone to modification, their authors suspected of deceit.

Faking It: Manipulated Photography Before Photoshop, a new exhibit at the Metropolitan Museum of Art in New York City, reminds us that yes, we have seen quite a few 'shops in our time. Tracing the practice through the centuries, the unprecedented collection shows that not only has manipulation been around since the beginning of the recorded image, but many of its methods and motives have remained more or less the same. 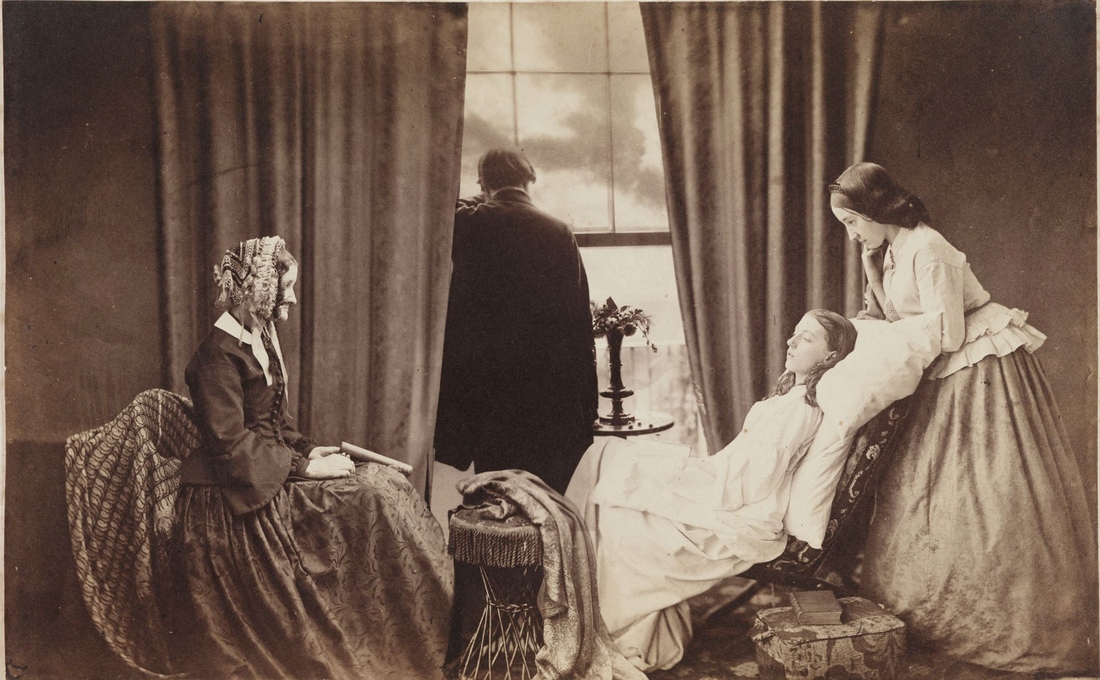 “It was probably less than ten minutes that went by [before] people realized they could lie with photographs.”

“It was probably less than ten minutes that went by from the invention of photography to the point where people realized they could lie with photographs,” said film director Errol Morris in an interview with Motherboard last year. But the “lies” that curator Mia Fineman is concerned with don’t involve moving cannon balls onto a dirt road; they are about the artistic manipulation of the photographic medium itself.

"This has always been a part of photography," said Fineman, speaking during a preview of the Met exhibit earlier this week. "To me it seemed that the most pertinent question was why — why is this image being manipulated?"

As one might imagine, the reasons are as varied as the artists themselves. But look deeply enough — as Fineman has — and patterns begin to emerge. 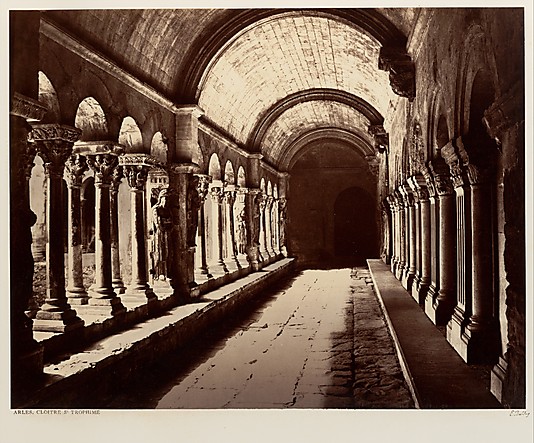 In the beginning, most manipulation had to do with the limitations of early photographic equipment. Applying paint onto prints and negatives was a cure for the common monochrome, and early photographers like Gustave Le Gray also used combination printing as a stopgap solution for the early camera's inability to capture both sky and earth in a single exposure. Three of Le Gray’s "Seascape" portraits, for example, use the same 'sky' image — though without hordes of vigilant internet commenters to parse his every pixel, it's unlikely he was ever called out for it.

In 1851, Édouard Baldus used a more complex compositing technique to capture a large scene of the Cloister of Saint-Trophîme. The final image had to be painstakingly cobbled together from around a dozen different negatives in order to maintain consistent focus and lighting. 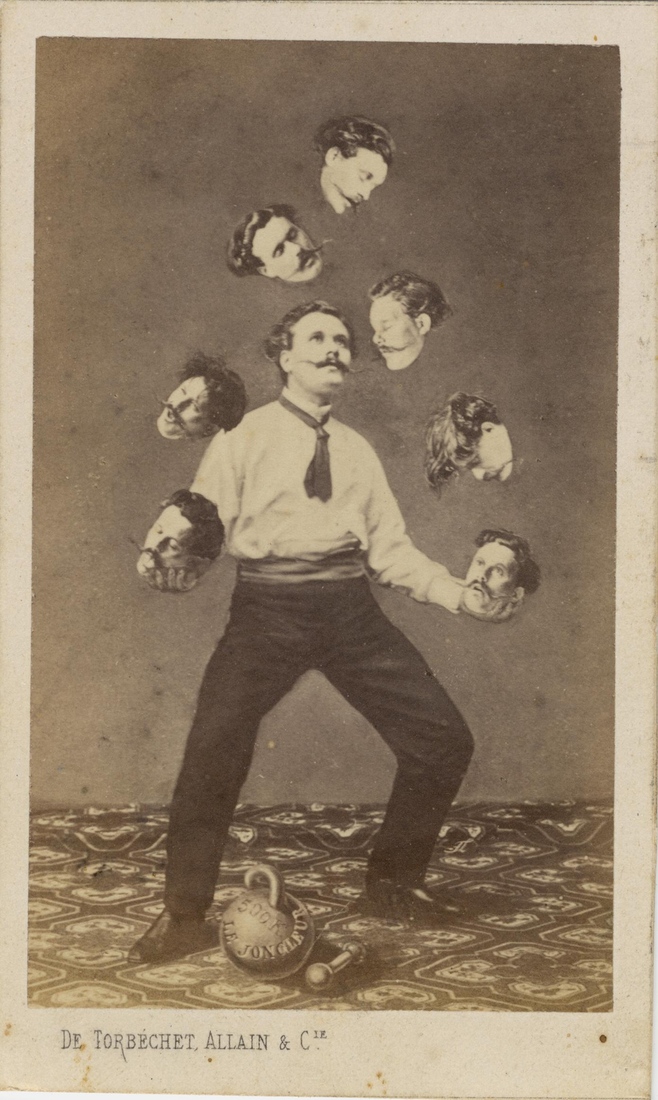 Fast forward a few centuries to Baldus' modern day digital equivalent, the German artist Beate Gütschow — her "LS" series, part of which sits across the hall in an “After Photoshop” companion exhibit, uses digital tools to build enormous composite landscapes in the style of 18th century painters, sometimes combining up to 100 separate archival images.

Apart from pushing limitations, photographers of the late 19th century also knew how to appreciate a good meme. A large number of prints from that era — featuring decapitated subjects holding, juggling, or otherwise posing with their own heads — might be seen as the lolcats of their day, owing to an alluringly macabre and widespread fascination with parlour tricks and stage magic. Like many a modern Photoshop folk hero, these artists were simply in it for the lulz — a good gag to fascinate or amuse.

But things get even more interesting when business, politics, and propaganda start to mix historic documentation with artistic allegory. After seeing a high demand for heroic portraits, photographer Levin Corbin Handy took to riding the line between fact and fiction: inheriting his uncle's archival negatives from the Civil War, he issued a photo in 1902 of what appeared to be Union war hero and former US President Ulysses S. Grant atop his horse outside of Union Army headquarters in City Point, Virginia. What most people didn't realize at the time is that the photo actually features the head of Grant placed atop the body of a Union soldier, and a superimposed backdrop of a Confederate internment camp.

In another more politically-motivated scenario, a photograph of Adolf Hitler carousing with the family of filmmaker Leni Reifenstahl was modified to have Nazi propagandist Joseph Goebbels completely removed from the scene. The change was likely made due to rumors circulating at the time that Goebbels and the filmmaker were having an affair, leaving a mysterious, ghostly halo where the infamous propaganda chief once stood.

Both situations bring to mind modern instances of photographic propaganda, like a viral meme that started last year after a local government in China published a hilariously botched photoshop of officials "inspecting" the results of a state-funded landscaping project.

There's also the wide world of tabloid hoaxes, like the fake image of Osama bin Laden's corpse that surfaced shortly after it was announced that the elusive al-Qaeda leader had been killed in Pakistan. “I have seen a great number of poorly Photoshopped images in my time as a photographer and I can tell by the pixels that it is a fake,” photographer Kenna Lindsay had said of the image in a choice bit of trolling that made its way onto the front page of CNN. Shortly after, internet sleuths demonstrated the image to be a simple composite, combining a photo of a bloodied man with a widely-circulated stock image of the terrorist kingpin. 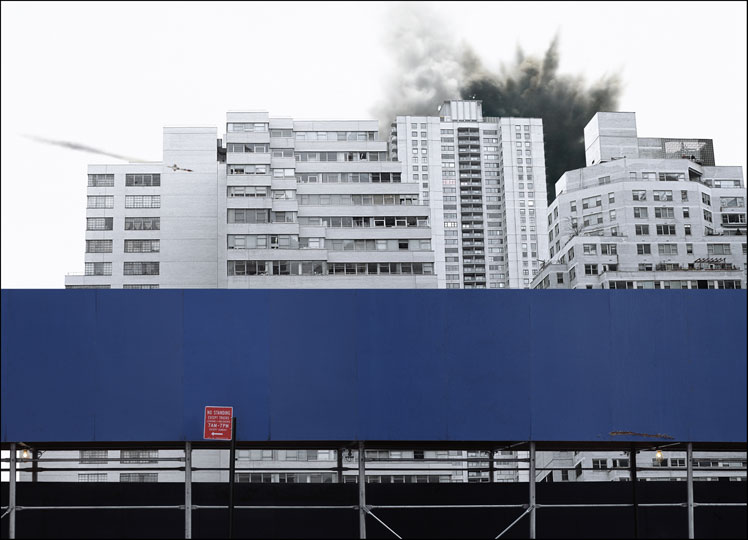 "The ubiquity of image-processing software has made people more savvy and more skeptical — and I think that's a good thing," says Fineman. "People are looking at images more attentively than ever, and blogs like Photoshop Disasters turn this close looking into a kind of game. People love pointing out egregious examples of "Photoslop": missing or misaligned body parts, models with weirdly poreless skin, shadows cast by absent objects. I think viewers find it empowering."

A more refined modern attempt might be Nancy Davenport’s series, The Apartments, which digitally adds explosions, fires, a balcony sniper, and other violent imagery into photographs of apartment building facades. The images, which were first shown to the public in 2001 days before the September 11th terrorist attacks, are like a kind of self-contained folklore — carefully constructed lies instilling a sense of anarchy into otherwise mundane scenes of everyday life.

“Let us not delude ourselves by the seemingly scientific nature of the darkroom ritual.”

Errol Morris's obsessive interrogations notwithstanding, photography would be pretty boring if it were only about spotting fakes and finding facts. Artists embraced manipulation in the 20th century and beyond as a means of continuing fine art traditions and concepts like surrealism, expressionism, and identity in the photographic realm.

American photographer Jerry Uelsmann, known for his striking compositions of fantastical and impossible vistas, sees the photographic medium as a kind of sorcery capable of telling the most beautiful lies. He describes the process of manipulation like being inside “a visual research lab: a place for discovery, observation, and meditation.”

“Let us not delude ourselves by the seemingly scientific nature of the darkroom ritual,” Uelsmann once wrote. “It has been and always will be a form of alchemy.” And although it’s based in algorithms and not chemicals, the same could be said of Photoshop’s digital darkroom — it's just another method in our ongoing experimentation with the truth.

Faking It: Manipulated Photography Before Photoshop, runs through January 27th, 2013 at the Metropolitan Museum of Art in New York City.