According to the International Telecommunication Union (ITU), there were more than six billion active mobile subscriptions at the end of last year. That's a jump of more than 600 million compared to 2010 which, despite sounding impressive, actually reflects slower overall growth compared to previous years. China alone accounts for one billion subscriptions, with India expected to hit the same milestone sometime this year. And the continued adoption of mobile broadband looks destined to climb exponentially as more and more devices are equipped with wireless connectivity.

Broadband innovation continues, but the US isn't leading the charge

Yet for all of the chest pounding among US carriers when it comes to leading the world in mobile technology advancements, the US ranks a disappointing 15th in overall broadband development. First place honors go to the Republic of Korea; nearly all households in the country (97 percent) are online and the ITU credits Korea for its rapid approach to improving telecommunications technology. One area where Verizon, AT&T, Sprint, T-Mobile, et al. aren't having any problem is revenue: the United States maintains a healthy lead in overall profits collected from mobile subscribers. 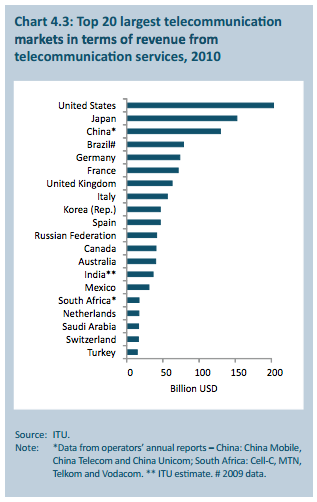 Developing nations are experiencing a stunning surge in broadband adoption. In fact, countries such as Bahrain, Brazil, Ghana, Kenya, and Rwanda saw double digit gains and accounted for what the ITU described as the "lion's share" of worldwide growth. Mobile subscriptions in these territories rose by 78 percent. That's a rare bit of good news for RIM, which tends to fare well in developing markets even as it continues to hemorrhage profits in the US and elsewhere. The full report contains a wealth of fascinating tidbits, so if you're looking for a good reference on where things stand we'd recommend diving in.