Asus will officially unveil the PadFone 2 during a simultaneous event in Milan and Taipei next week, but Bloomberg TV was able to take an early look at the phone and tablet hybrid, exposing a few never-before-seen features. As shown in the video below, the next PadFone handset looks largely similar to the first generation model with the exception of a larger, 4.7-inch screen. Along the backside of the device is a 13-megapixel camera that, judging by the sample photo in the video, appears to take high-quality pictures. The most notable difference, however, is the redesigned PadFone Station.

With the original PadFone, the handset fit into the dock by way of a door on the rear of the tablet. Now the entire backside of the PadFone 2 handset will be exposed when connected to the dock, with the face of the phone resting inside the unit. Additionally, the new tablet body as a whole appears much thinner than its predecessor. During our review of the original PadFone, we had no qualms about the size and weight of the docking station, but the new svelte body may help the pairing look more attractive when sitting next to competing devices on store shelves.

Update: Hot off the heels of the video, we're now getting a look at what appears to be a set of promotional images of the PadFone 2, courtesy of Twitter user @evleaks. 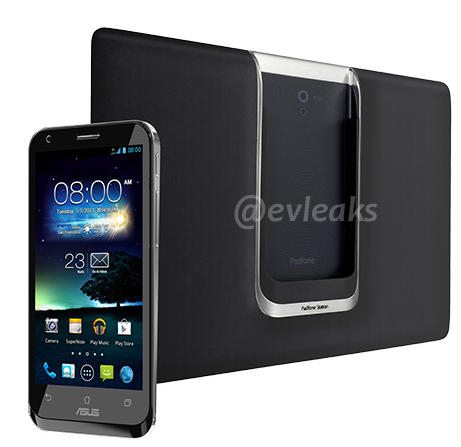