Microsoft took the wraps off its Xbox Music service today, with free streaming on Windows 8-based PCs and tablets. However, Windows 7 and Windows Phone 7 users will not be able to access the new service. Xbox Music is designed for Microsoft's Windows 8, Windows Phone 8, and Xbox 360 systems.

Zune lives on, for now

Microsoft tells us that existing Windows Phone and Windows 7 users will be able to continue using the Zune Music service, providing access to the same catalogue of songs as Xbox Music. "Windows 7 will still have the old Zune client. That client will have access based on the subscriptions and the content that anyone purchased and that content can flow forward to Windows 8 but we're not touching that client just now," says Jerry Johnson, general manager of Xbox Music.

"It's a very different feature set but you'll have access to the same content," says Johnson. "We're not going to update the [Windows Phone 7 client]. There might be some iconography upgrade from what I've seen but it will continue to be a Zune product because it's not going to take on the Zune features we're going to walk through today." 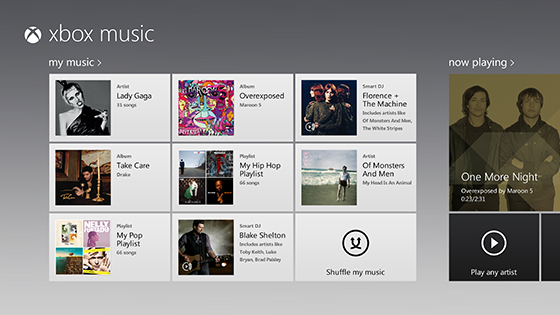 The added benefits of free streaming for Windows 8 and cloud syncing of playlists will not be offered to existing Windows 7 and Windows Phone users either. Microsoft will also add a Cloud Storage service to Xbox Music next year, allowing users to scan-and-match their own music and have it stored in the cloud. This part of Xbox Music will only be available to Windows 8, Windows Phone 8, and Xbox 360 users.

Although Microsoft is making the push towards a unified music offering for its customers, the lack of availability for Windows 7 and existing Windows Phone will pain those who do not wish to upgrade their PC operating system or buy new smartphone hardware. Coupled with a launch for Android and iOS "within the coming year," the move to cut support for the popular Windows 7 operating system feels particularly odd.

When we first heard about Xbox Music (codenamed Woodstock), there was talk about a browser version to cater for additional operating systems. "When I mention iOS and Android, we think of those as reach clients," explains Johnson. "They're, 'how do I access something I'm doing somewhere else' and web would be an important part of that... it's on the roadmap." Microsoft isn't discussing exactly when this will arrive, but we can only hope that it's planned for 2013 to make Xbox Music a true cross-platform service.