Share All sharing options for: Xbox Music launches Tuesday on Xbox 360, will come pre-installed on Windows 8 and Windows Phone 8

Microsoft's new music initiative begins in earnest starting Tuesday, October 16th alongside the new Xbox 360 Dashboard update. The Xbox Music service — named as such to emphasize the Xbox's branding as an entertainment brand that goes beyond just gaming — will launch tomorrow with Xbox 360 and come pre-installed on all Windows 8 (starting October 26th) and Windows Phone 8 devices.

A unified user experience across all three platforms

The Xbox Music interface is exactly what you'd expect from a new Microsoft app: a heavy emphasis on tiles. The top of the software shows you option to access your personal music and playlist, editorially-driven recommendations, and top-played tracks across region. It's a unified experience across Windows 8, Xbox 360, and even what little we saw of the Windows Phone 8 app. And it's really nice, in fact — a very logical interface that minimizes the clicks from open to playing. There's a bit of Smart Glass functionality, too, in sending playlists and songs from a Windows 8 device to the Xbox 360. 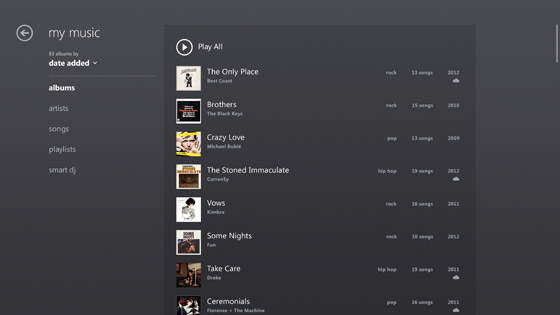 Additionally, the Xbox Music Pass grants Xbox 360 users access to almost 70,000 music videos — more than Vevo, according to Johnson. "We really focused on where is the best place to enjoy and consume music videos and we said it's going to be the big screen," he said, and while we agree the presentation is gorgeous, we don't see the need to limit music videos to just the set-top console — especially with OEMs offering Windows 8 devices with large screens.

At launch, the free music streaming is for Windows 8 only and will be available in 15 markets. The subscription-based Xbox Music Pass (all three platforms) and à la carte Xbox Music Store (Windows Phone 8 and Windows 8) will be available in 22 markets. Microsoft is touting 30 million tracks worldwide, a global catalog "on par with iTunes," and both the selection and number of markets will grow in the coming months.

Microsoft is promising a number of features coming in 2013, including more social integration, scan-and-match functionality, and a cloud-based locker that will separate from SkyDrive. So-called "reach" clients like iOS and Android are also due "within the coming year" and a web-based client is on the roadmap. Alas, the future of Xbox Music starts with Windows 8 and Windows Phone 8 — those on Windows 7 or Windows Phone 7 will have to stick with Zune. The new Xbox Music is a hard but promising sell: a strong library and easy-to-use interface that's limited by the number of platforms it'll be available for. The initiative begins tomorrow, but it's going to take more ubiquity to really see its potential.

Update: Microsoft's terms of service for Xbox Music reveal that after six months of use the free streaming option for Windows 8 will be limited to just ten hours of playback each month.