Share All sharing options for: Microsoft Surface RT priced at $499 or $599 with Touch Cover keyboard

After announcing its Surface tablets nearly four months ago, Microsoft has now unveiled the pricing for both of its ARM-based Surface RT tablets at its Microsoft online stores. The 10.6-inch Surface, powered by Windows RT, will go on sale on October 26th and will be priced starting at $499 for the 32GB version without Touch Cover and a 32GB version with the Touch Cover for $599. Microsoft is also offering 64GB model for $699 with a Touch Cover included. The 9.3mm thin tablet weighs just 1.5lbs and includes a built-in kickstand and vapor-deposited (PVD) magnesium case.

Microsoft listed its Surface pricing at its online Microsoft Store this morning, indicating that pre-orders will be available shortly. The company has also listed the prices for its Touch Cover, at $119.99 each, and Type Cover for $129.99. The Touch Cover appears to be available in white, red, black, blue, and purple colors – while the Type Cover is listed as a single item in black.

Microsoft's advertising campaign for its Surface devices has already kicked off, with Surface street art spotted in a number of US cities over the past few weeks. The software maker will hold a Surface reception event for press and analysts on October 25th, and some of the company's holiday pop-up stores will open at midnight on October 26th to start selling the tablets. 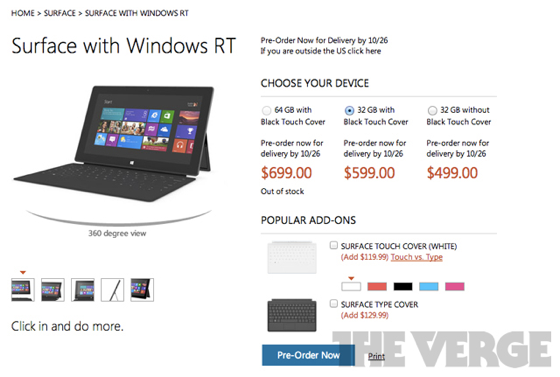