Uber's "damn the man" strategy may have backfired. The San Francisco-based startup took a chance when it launched its taxi-hailing service in New York against the wishes of the local Taxi & Limousine Commission, hoping that the regulators would bend — or that customers would love Uber Taxi so much that the TLC would have to give it a pass. The goal was to be the first mover in a hotly-contested new market. However, after just over one month of operation, Uber is now asking taxi drivers to turn in their company-issued iPhones and cease using the app to pick up fares.

Uber is "about to take a very expensive bath," one industry insider told The Verge in an email.

Rumors that Uber was drawing down in New York started more than a week ago, but CEO Travis Kalanick has consistently denied it with a series of shifting explanations. "We're having inactive drivers return phones," he wrote in an email. "We do that as a regular operational procedure in all markets on all products." Next, he suggested that certain drivers were being asked to return phones because they weren't up to Uber's standards. Finally, he wrote, "We are still doing taxi trips. You must have a few taxi drivers as sources that were from a single onboarding that are providing bad and outdated information to you.

"We have had some difficulties due to the lack of support from the TLC," he admitted, "but we continue for as long as we can."

"Every week it was slower than the other, and for the past week or so, they just did nothing."

However, Uber drivers were given a different story. Multiple drivers said Uber called them into headquarters, claiming they needed to come by in order to get paid and would get a cash bonus for showing up. When the cabbies came in, Uber surprised them by asking for the device back, informing them that taxi service was no longer available in New York.

"They said they're no longer doing the taxi thing any more, they're collecting the phones back," one cab driver told The Verge. He'd been using the app since Uber first launched its taxi service, and noticed the number of passengers dwindling. "When they first started, it was okay," he said. "Every week it was slower than the other, and for the past week or so, they just did nothing."

Another cabbie said Uber encouraged him to sign up for Uber's black car service instead, and tried to incentivize him with $1,000. A third cabbie told The Verge he went to Uber to sign up for the taxi service, and was told the company wasn't "doing that anymore" and asked if he drove a black car.

Even if Uber is still officially operating taxis in New York, the service is effectively defunct. The Verge's repeated attempts to hail a cab over the last week resulted in the message, "We're sorry, no TAXIs are available right now." Taxis are still being advertised in the app, even though no taxi drivers seemed to be using it; however, on Uber's website, taxis aren't listed as an option in New York.

Regarding the inability to actually hail a cab from the app, Kalanick wrote, "there is way more demand for our taxi product than we have supply."

Uber has operated black cars, which are reserved in advance, with the TLC's blessing. But by adding yellow cabs, which by New York City law are only allowed to pick up street hails, Uber opened itself up to a bunch of additional regulations. From tipping restrictions to the prohibition against cabbies using cellphones, there were plenty of little rules to potentially get Uber Taxi and its drivers into trouble. When the TLC expressed concerns in the eleventh hour, Uber decided to launch anyway. 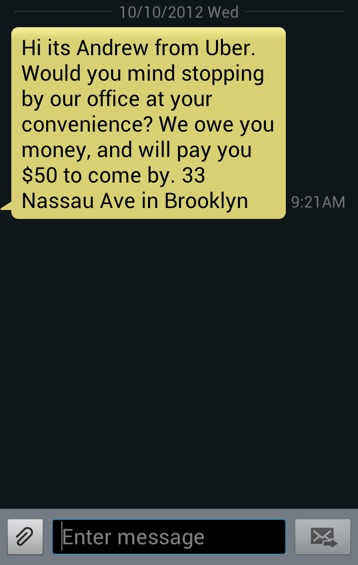 The TLC didn't bend. Three days after the launch of Uber Taxi, the agency announced that drivers who accepted payments through Uber could be fined, or worse, lose their licenses, which spooked drivers.

At first, Uber tried to skirt the issue by giving the rides away, under the theory that the rules don't apply to a $0 transaction. The startup had about 100 drivers signed up when it launched and the service got good reviews from customers and cabbies.

However, it seems the days of free rides are over, and passengers attempting to get a cab at rush hour, will have to wait until the TLC's contracts with its payments providers expire in February. But by then, competitors such as Get Taxi and Hailo will likely be ready with their own street-hail apps, exactly the scenario Uber wanted to avoid.

Uber has repeatedly scuffled with government agencies in its quest to disrupt the highly-regulated, deeply-entrenched taxi and livery industry. Most recently, the taxi commission in DC proposed a new set of rules that could shut Uber's black car service down.

In that city, and in Boston, Uber was able to push back against regulators by appealing to its fans, passionate customers who loudly demanded that the government give them their Uber. New York, the nation's largest taxicab market, seems to be the only battle from which Uber has retreated.

Update, 1:21 pm: Uber just confirmed on its blog that it has shut down taxi service in New York until next year, blaming regulators. "In the meantime you can try Uber Taxi in more innovation-friendly cities — including Boston and Toronto on the east coast," Kalanick wrote.

Correction: An earlier version of this story mistakenly referred to Uber's service in DC as taxis; they are black cars.

More from this stream Uber's bumpy road to world domination