Seattle-based location-sharing company Glympse today announced version 2.0 of its service for iOS and Android — its biggest update yet — that lets you view friends on a map in real-time as they move around town. It's like Apple's Find My Friends app, except it works across multiple platforms, as well as on computers. Glympse lets you authorize specific users, and now groups as well (symbolized by names like !picnic) for up to four hours at a time. An innovative timer dial makes it simple to send a friend or spouse your location when you hop in the car. If you send your location to a group, any member of the group can see a communal map, which makes checking ETAs (and even a driver's speed) dead simple.

Until now, Glympse only let you view one person at a time, embodying the company's goal of replacing "where are you?," a common question among husbands and wives returning home from work. The key for the company thus far has been its utility and ease of use — you can send a Glympse to anyone on mobile or via email, even if they don't have the app. Glympse has quietly become a leader in the location-sharing space since it launched in 2009, amassing 3.5 million downloads without doing marketing of any kind. "We resisted the temptation to do badges, etc," CEO Bryan Trussel told The Verge. "We've been thrilled that many location apps are chasing 'the shiny object.'" 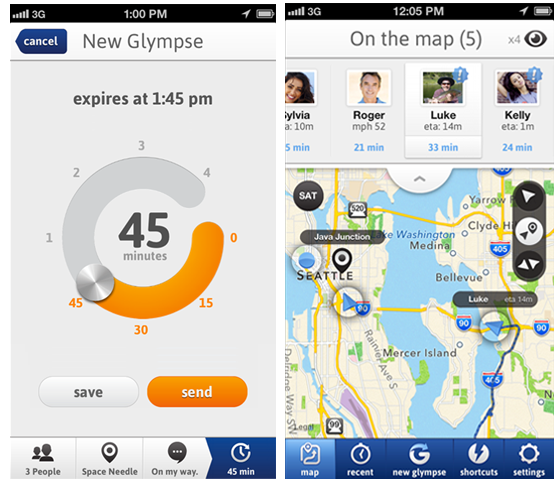 Another new feature in Glympse 2.0 is "Request a Glympse," which lets you ask another user to send you their location. Trussell hopes that the new feature will solve the problem of back and forth texting, trying to figure out when somebody will arrive. Lastly, with new Google Calendar, iOS Calendar, and Outlook Calendar integration, the app lets you instantly ping your location to everyone attached to an event you're late to.

Many apps that boast "location awareness" as their tentpole feature haven't been so successful. Find My Friends is a decent app, but has intimidated many users who don't want friends to "always" see their locations. (Yes, Find My Friends includes temporary sharing, but only with people who aren't on your Friends list). Since Glympse offers such a distinct and specific utility, the creepy element many location-sharing apps evoke washes away. You're left with a tool that attempts to solve a problem, and lets users on multiple platforms control every aspect of the solution. "We want to be a verb like Google," Trussel says. If the company keeps focused on its mission, it might just become the de facto "where are you?" it's always aspired to be.