Gizmodo has an ad for Microsoft's Surface tablet currently running on its front page. The advert says that Surface is now open for pre-order and invites you to "buy now," but clicking on it redirects you to a Bing search for "Surface Microsoftstore." It's likely that an error has led to the advertisement running early, but this could be an indication that Microsoft is planning to finally announce its Windows RT tablet's pricing and availability today. The Verge user Tylers86 has spotted the same adverts running over on AllThingsD.

A quick Google search for "Surface" at the Microsoft Store returns a store listing that is unfortunately not yet live, but using Google's thumbnail cache reveals a product listing pricing the Surface at $0.00 — an incomplete listing, we're sure. Microsoft traditionally makes announcements on Tuesdays, so it looks as though the wait for Surface pricing may be over. 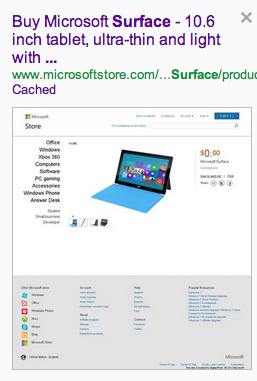