We've been recommending Pokki, an app launcher and widget for Windows users, for nearly a year now, and the software is now ready for the upcoming Windows 8 launch later this month.The latest beta brings full support for Windows 8 to download and run various apps like Gmail, Pandora, and Angry Birds — with options for the usual desktop notifications and badges.

A Start menu replacement for Windows 8 is also included, an option that Pokki added following Microsoft's decision to kill off the Start button and menu in its latest operating system. Cofounder and chief marketing officer Chester Ng says Pokki has brought back some core Start menu functionality in a different way. "As we look forward to Windows 8, we're like the rest of the world — we just don't know," says Ng. "We don't know if it's gonna be great or work or be wildly successful for touch let alone non-touch usage." Pokki feels that users might be frustrated, confused, and lost without a bridge to the traditional Start menu.

"We're doing it in a different way than guys like Stardock or Vistart or Samsung's S-Launcher. So rather than bring back the Windows 7 Start menu, which we agree with Microsoft is really outdated… we really wanted to integrate the core Start menu functionality and then modernize it." Pokki's Start menu isn't just a Windows 7 clone, and nor does the company charge any money for its app. It brings a launcher of sorts which includes favorites for desktop and Metro apps. 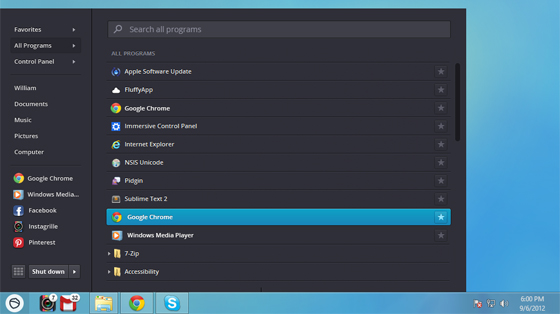 It also allows Windows 8 users to avoid Metro, with options to boot directly to desktop and the ability to disable the new hot corners which provide access to Microsoft's new user interface. The move might be set against the flow of Windows 8, but for those who want the added benefits that Windows 8 brings to the desktop — without Metro — then it's a great option.

The Pokki Menu sidebar is enabled by default on Windows 8, but users of Windows XP, Windows Vista, and Windows 7 can also use it as a Start menu replacement. We tested the boot to desktop option for Windows 8 and found that it was a little delayed bypassing the Start Screen, but Pokki tells us the app will be updated over the coming weeks to optimize this and other elements. Pokki for Windows 8 is available in beta from Pokki.com.