Behind the mask: being yourself as someone else at New York Comic Con

Thousands of people spent their weekend in costume; we asked a few of them to step out of character

One of the best parts of any New York Comic Con is the walk to the Javits Center, when hundreds of people dressed as superheroes, alternate universe Victorians, and anime characters descend on Midtown Manhattan. For a few days, the blocks around Penn Station come alive with color, playing host to interactions between costumed attendees and the baffled or intrigued locals and tourists who no longer own the streets.

After a while, the lines between cosplayer and civilian start to blur: when enough people are in costume, everyone is. When enough people have thrown off the conventional wisdom dictating that clothing should be merely utilitarian, decorative, or indicative of who you are in real life, it’s easy to start picking it apart to look for a story.

That’s a great police officer outfit, you think. If I can get closer to read the badge... at which point, you realize that you’re staring at security for NYCC, not a meticulously attired facsimile of John Blake from The Dark Knight Rises. Suits are even more ambiguous, with indications of character as subtle as a certain posture or tie. Anyone with a bald or shaved head may as well put on a blazer and decide whether he’d rather be Agent 47, King Mob, or Spider Jerusalem. More muscular ones can come as Bane, who’s seen a resurgence after the release of Nolan’s film.

There’s a certain sensory overload attached, a feeling that you’ve got to uncover the intentions behind every shirt and accessory. But living temporarily in a world imbued with fiction is also tremendously beautiful. For a few days, everyone is a costume designer for their own personal drama. At New York Comic Con, an unconscious survival tool becomes a thing to celebrate, and one simple question — "who are you?" — becomes a little more fluid. Are you a fictional character? A man or woman behind a facade? A canvas for a painstakingly constructed masterpiece? Or are you, for a few days a year, just being yourself? — Adi Robertson

Special thanks to everyone who participated. You all are incredibly awesome. 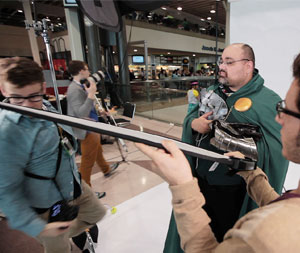 More from this stream From space suits to sci-fi suburbia: the future, in photos