With Surface looming, Microsoft fails to explain Windows 8 vs. Windows RT to consumers

With Surface looming, Microsoft fails to explain Windows 8 vs. Windows RT to consumers

If Microsoft Store reps don't know the difference, how will Surface buyers?

With only nine days remaining before an October 26th launch, Microsoft's Windows 8 marketing campaign is approaching full force. With an estimated $1.5 billion budget, Redmond is plastering subway stations, spraying walls and sidewalks, erecting website banners and planning holiday pop-up stores, not to mention running expensive commercials on national television. So far, Microsoft is focusing much of that effort on promoting its flagship Surface tablet, which went on pre-order yesterday.

The $499 tablet uses Windows RT, a stripped-down version of the operating system designed for low-power ARM chips like the kind you'll find in today's smartphones. That has some benefits, but it also means it runs a limited array of software as a result. Your existing Windows applications cannot run on the Surface with Windows RT, and so you'll need to download new ones from the Windows Store and pay again... assuming developers have ported their programs to begin with. To the untrained eye, Windows 8 and Windows RT are identical, keyboard attachments, desktop modes and all, but only one supports legacy apps.

This shouldn't be news, but it is

This isn't news, not by a long shot. Microsoft promised that it would address this particular digital divide way back in September 2011, at the Build conference where developers were first introduced to Windows 8. "It's only to our advantage to not have confused customers," Steven Sinofsky, Windows chief, told attending media. "We will be clear what the value proposition and what the software is capable of and we'll do that with all the communication tools at our disposal," he said. When we asked Microsoft's Mike Angiulo about legacy apps on September 16th, 2011, the VP of Windows Planning said that Microsoft's marketing team would be able to devote significant resources to solving the problem.

"We will make sure it is absolutely clear where your legacy apps will run," he told us.

And yet, over a year later, with pre-orders open, and nine days before launch, you'd be hard-pressed to find Microsoft informing consumers of this particularly crucial factor in their purchasing decision. Legacy software doesn't even get a bullet point Sure, in the "Help Me To Choose" tab on the Surface for Windows RT pre-order page, there is a short "Windows RT vs. Windows 8" guide, but legacy software doesn't even get a bullet point. The guide first lists bullet-pointed features that are shared by Windows 8 and Windows RT, then added benefits that are only in Windows RT, and finally a few features (like Windows Media Player) that Windows RT omits. Only at the bottom, after the bullet-point lists end, does it say: "Although you can install apps directly from the Windows Store, you can't install apps on the desktop on Windows RT."

What does "you can't install apps on the desktop in Windows RT" mean, anyhow, even if you happen to see it there? Microsoft's Surface landing page does a little better with the phrase "Works exclusively with apps from the Windows Store," but good luck finding it in the fine print, and there are few other places online, period, where you'll find Microsoft making a comparison between Windows 8 and Windows RT for the consumer's benefit.

Update: Microsoft actually does have a far better mention on another part of the Surface landing page. If you go here, you'll actually find the phrase "Works exclusively with apps available in the Windows Store" high up the page. That phrasing still doesn't quite explain things, but it's not bad. It does, however, only inform those who are directly comparing the Surface RT with its full Windows 8 Pro cousin, which won't be available until early next year.

I told some of them I was interested in Surface with Windows 8, and waited to see if they'd correct me and tell me it had Windows RT. (None did.) I asked others if Windows RT and Windows 8 were the same thing. I asked all of them what the differences between the two operating systems were — several times if I needed to — and I asked about any jargon or terminology that I thought an average buyer might have trouble understanding. I asked if I could move my games over to the Surface with Windows RT, and if I could install applications there.

To their credit, half of the representatives admitted that Windows RT wasn't as capable as Windows 8. The other half... not so much. Moreover, those reps who did admit issues seemed dismissive of Windows RT as a whole. Here are some of the highlights: 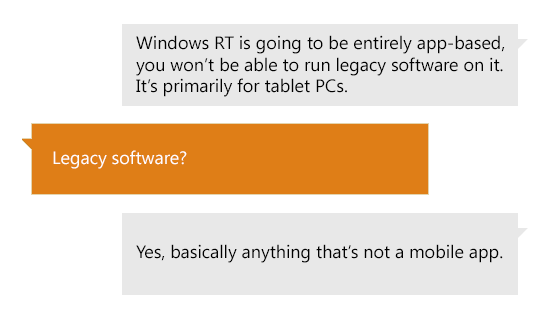 Now, it's not news that technology salesmen aren't generally known for product knowledge, just as Windows RT's lack of backwards compatibility wasn't news to all. Admittedly, the void between Windows 8 and Windows RT would be difficult even for seasoned technology vets to explain, much less your average retail employee. The operating systems look and feel so alike, and the reasons behind the lack of legacy apps are so technical that consumers might tune out. Even if Microsoft said "it doesn't run legacy apps" outright to every single buyer, would they understand what that meant?

Also, it's not like Microsoft is the only company that's ever had to deal with such distinctions. Apple infamously claimed that the original iPhone ran OS X, and almost every Android device sold comes with a slightly different look and feel since manufacturers and carriers insist on adding their own skins. It takes a concerted effort to explain these critical differences to the population at large, too: we in the media (yes, here at The Verge) have our own role to play in educating customers.

What's more, this could still be a temporary problem. For Microsoft's part, the company tells us that there will be a specific marketing push around Windows RT, in addition to the Windows 8 ads, and that in-store marketing materials will make it clear that Windows RT devices will only run Windows Store apps. If that's clearly and quickly communicated, and not just in the fine print, then we might all be able to see Windows RT for what it is: an app-centric derivative designed to show up the iPad and Android tablets, rather than Windows 8 in thinner form factors.

Still, that could be little comfort to today's buyers who see Windows 8 and Surface advertisements and mistakenly connect the dots. Microsoft promised that it would take care of this mess over a year ago, and as of today, many of its own retail employees are still in the dark.

Update: Microsoft tells us that it is currently training Microsoft Store employees to proactively ask questions so they can help recommend the right device for customers. By the October 26th Windows 8 launch, they will have 15 hours of training on average. Here's Microsoft's full statement:

The new Windows family is truly Windows reimagined, and we are working to ensure our store teams provide a great experience to our customers purchasing Surface or a new Windows 8 PC. We are not yet selling Surface, Windows 8 or Windows RT devices in our stores – by GA on 10/26, all team members will be fully trained on helping customers know which choice is right for them. We will be training our team members to ask qualifying questions to help determine their customers’ needs and the best products to fill those needs and recommend the right device and by GA, store associates on average will have completed more than 15 hours of training on Windows and Surface.