An uneven, but thoughtful and innovative attempt at reinventing email

AOL today announced Alto, a web-based IMAP email client that lets you manage multiple email accounts on one website. "We found that nobody wants another email address," Senior Director of Product for AOL Mail and Alto Joshua Ramirez told The Verge. "People have multiple email addresses, and they want to get it in one spot, so we went back to the drawing board and came up with something we think is game-changing." The web app is available today by invite only, and will launch to the general public in the first quarter of 2013.

"From an IMAP perspective, we're one of the first web-based clients," Ramirez says. The app manages multiple email accounts as if it were a desktop app like Sparrow or Outlook, but is as snappy with search as web apps like Gmail. "Mail usage has changed, but clients haven't changed much since the original AOL Mail," Ramirez says. "The last time there was a major mail innovation was 2004 when Gmail launched, but if you look at today it's feature-wise almost the same." AOL's betting on a hybrid cloud mail client for all your email addresses, with a fresh look and some interesting new features. Alto looks and works like most email clients you've used, but was born with one priority in mind: get rid of all the detritus clogging your inbox and divide it into "Stacks" — a metaphor Ramirez frequently references.

Editor markup for AOL Alto screenshots. This is only visible in the story editor.

Alto automatically creates stacks for daily deal emails (Groupon), retail emails (Best Buy) and social networking site notifications (Facebook) — three of the most common culprits of messy inboxes. You can also create stacks of your own, which function like Gmail folders that pipe in messages from certain senders. When you click a stack, you see one of three views: message view, tile view, or page view. Message view looks like Sparrow, but adds a unique pie chart to show where the bulk of the messages in that stack are coming from. Tile view creates a grid of messages, each message symbolized by the image in each message (which works well for browsing Groupon or LivingSocial offers). Page view is designed for flipping through your daily deals emails in full-screen as if they were old Sunday Best Buy ad books, Ramirez says.

"Stacks are digital manifestations of physical processes," he says, "like when you go to the kitchen counter and sort out stuff at the end of every day." Ultimately, Alto's stacks are meant to be places to put things to read later. Since you can choose to have these types of message bypass your inbox, your inbox effectively becomes a lot cleaner. On the flipside, once you've categorized items into stacks, daily deals and retail emails end up being easier to browse instead of being barriers to what's important in your inbox. Photos and Attachments stacks are also present, which let you easily dig through all the photos in your mailbox from years past. A slide-out right menu lets you narrow things down by year, by account, and even by sender.

Aside from stacks and the ability to manage multiple accounts on the web, Alto has a few more appealing features, like its flexible search bar. It's as fast as Gmail, but it searches all of your mail accounts (whereas Gmail searches just one). Alto's search tool also divides up results into messages, contact cards, and photos related to your query. One nice feature in your inbox is that Alto lets you "snooze" emails you want to pop up at the top of your inbox later, a la Boomerang. And since AOL knows you love Google Calendar and Google Drive, it includes shortcut buttons at the bottom of your screen for quick access, which is a nice touch. Next to these shortcuts is a People button that takes you to contact cards for those you've emailed with, where email addresses are combined with data from your social networks (assuming you've signed in). For now, the People hub shows potential, but is messy in its execution. 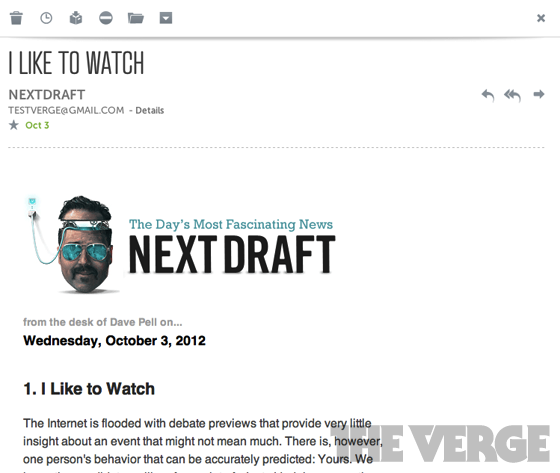 In the limited time I've had to test Alto, I've found that it's an uneven but thoughtful and innovative experience. The auto-created Attachments stack can be a trip backwards through time, and the search bar is excellent for poring through all your email accounts at the same time. The Daily Deals and Retail stacks instantly clean up your inbox. On the other hand, there's no threaded conversation view (a deal-breaker for Alto, but I'm told that it's coming soon), no mobile site (also coming), and the app is just plain over-styled — from its color palette to the imposing font it uses for senders and email subject lines. But maybe that's the point. "We wanted Alto to pass the 15-foot test," Ramirez says. "Somebody 15 feet away would never say 'that's Gmail.' Instead they'll say 'what is that?'" At the end of the day, Alto is a brave entry into a webmail scene that hasn't asked to be fixed, and an assault on Gmail, which has only received incremental updates over the years. It's an effort at bringing back the magic of when AOL ruled email. "'You've got mail' used to mean something," Ramirez says. Even for Alto, it's a tall order.