With Windows 8 just over a week away, large touchscreens are the talk of tech town. However, N-Trig believes that some of you will want to purchase a stylus as well. Like its well-known competitor Wacom, the company's been providing active digital pens for a while now, with many levels of pressure sensitivity and the ability to hover over the screen, but there have always been a number of limitations. Now that the company believes the stylus might find a bigger niche, it's prepping some more accessible options. For instance, while most of N-Trig's recent pens require a AAAA battery, N-Trig's Gary Baum gave us a sneak peek at the very first rechargeable model.

See the thin silver pen in the case above? It uses a supercapacitor, so you don't need to leave it plugged into the wall or remove an internal battery to charge. The supercap can store energy so rapidly, you'll be able to merely touch it to a charging spot for fifteen seconds to get four hours of use, and the smaller size of the power source allows N-Trig to make the stylus physically smaller than other models. Right now, the company sells 9.5mm models, but the supercap stylus will be 8mm instead, and the company's working on a 6mm supercap stylus that can more easily slot into tablets. Perhaps it could even charge while it's docked. 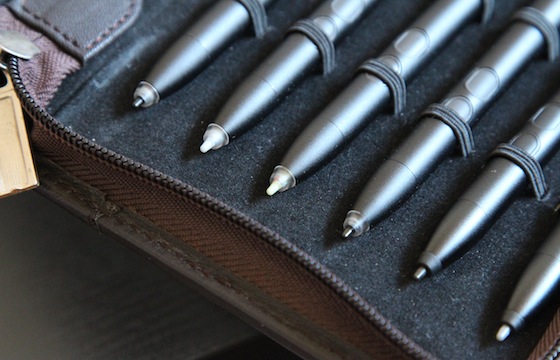 The biggest thing N-Trig is doing to promote the idea of a stylus, though, is reducing the barrier to entry. Typically, laptop and tablet manufacturers need to make a very conscious decision whether to include a stylus in a device, because it has repercussions. Not only does the pen cost money, but so do the extra sensor and controller in the tablet. What N-Trig is pitching, and you'll find in the new Sony Vaio Duo 11 slider and Fujitsu Stylistic Q702 detachable tablet, is a single sensor that recognizes both 10-point capacitive multitouch and N-Trig's stylus and a single controller that processes both as well. N-Trig says the cost is similar to that of a multitouch screen alone. The idea is that manufacturers who want to add a touchscreen can use N-Trig's solution, and then the user can decide if they want to add a stylus later on.

We're not quite sure when N-Trig's supercap stylus will be available or how much it will cost, and we weren't able to test it side-by-side against a Wacom for comparison. Still, it most definitely works, and we're curious to see if it will become an attractive option for Windows 8 buyers as the price of admission comes down.