Craigslist finally forced to innovate as competition edges in

Map View is the first significant upgrade to Craigslist in years, and more changes are coming

Share All sharing options for: Craigslist finally forced to innovate as competition edges in

In June, 27-year-old programmer Eric DeMenthon received a letter concerning PadMapper, a popular site that aggregates rental listings from Craigslist and other sources and displays them on a map. Suddenly, Craigslist had decided to crack down on the one-man operation after passively sanctioning it for more than three years, declaring that PadMapper could either stop using its data or face legal action. Two months later, Craigslist and PadMapper are entangled in litigation — and an explanation for the odd timing has surfaced: Craigslist is rolling out its own version of PadMapper’s service, called Map View.

Setting aside any questions of fairness and accusations of corporate bullying, Map View represents a crucial moment in Craigslist’s 16-year history. If you owned a website that generated more than $100 million in revenue a year, on top of being considered a cultural phenomenon, you probably wouldn’t want to mess with it too much. Craigslist, the ubiquitous classifieds/forum/housing/dating site founded in 1996, has taken this "if it ain’t broke, don’t fix it" attitude to an extreme. Although it has made small changes to things like the way images are displayed in listings, Craigslist is virtually indistinguishable from its 2001-era self, remaining a text-dense translation of the classifieds section in the newspaper.

That one innovation — bringing classifieds online — has worked for an amazingly long time. It shook the newspaper industry by cutting into a critical source of revenue and made Craigslist one of the top 50 biggest websites in the world. In general, peer-to-peer marketplaces work better as they get bigger, and Craigslist became a virtual monopoly which has proved unshakable by generations of startups. Its size, combined with a willingness to forgo maximizing profit, made it possible for Craigslist to tower over and undercut any would-be challengers. Its now-famous litigiousness also ensured no one could piggyback on its success.

Craigslist defied the innovator's dilemma, the theory that a successful business will ultimately be disrupted unless it continues to innovate. It seemed as if it might have discovered the formula for everlasting relevance — until recently, when the success of a few clever startups seems to have shaken the giant from its slumber. After sitting on the sidelines for every trend from Flash animations, to rounded corners, to APIs, Craigslist is finally making major upgrades in order to prevent users from decamping for competitors. 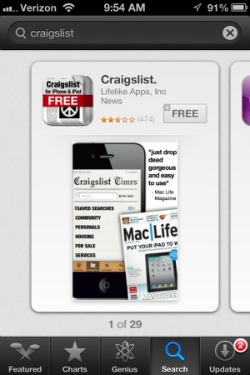 In economic development, there is an ideology known as "appropriate technology," which means that the cheapest tool that still gets the job done is the best one. Appropriate technologies are small-scale, labor-intensive, efficient, and locally-controlled, according to non-profits and academics, and do nothing more than meet people's needs. That description neatly fits Craigslist, which provides the world with a low-cost utility and has long considered itself a charity trapped in the body of a business (hence the .org address).

There are dozens of Craigslist apps for iPhone and more than 100 for Android. However, none were built by Craigslist — they’re all made by independent developers who pay to license Craigslist’s listings. Craigslist didn’t even have a mobile version of the site until June, when mobile and tablet-optimized versions appeared. "Craigslist started testing mobile and tablet-optimized formats of their website," wrote Matt Inouye, a San Francisco-based ecommerce entrepreneur. "Hell hath frozen over." According to job listings, mobile apps are also in the works.

This is all just playing catch-up to the rest of the web in 2012, but Craigslist is fixing to do more. In one job listing, the company said it was looking for engineers to make the site merely "faster, friendlier and easier," but also "develop new products and features that will have CL users swooning."

Craigslist dominates in the US and Canada, but companies like Naspers have won out in international markets through aggressiveness and innovation. At home, American startups have proven that simple innovations can lead to rapid growth.

Craigslist has been particularly threatened by startups edging in on its lucrative real estate listings. PadMapper had more than a million page views a month at its peak. Lovely, which launched a year ago, took the same concept and added a prettier design, real-time inventory, and integration with Facebook, and is on track to hit 300,000 page views by the end of 2012. 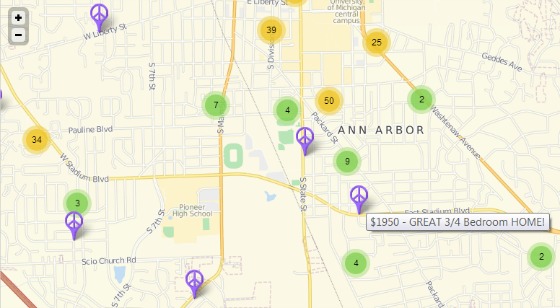 "If you take the non-cynical point of view, Craigslist finally realized through community feedback that the users want certain features," said Blake Pierson, founder of Lovely. "If you take the more cynical view, it’s sites like Lovely and PadMapper. Like, ‘these guys are doing really well with these map-based searches and we’re losing market share, we need to do something.’"

There are a few sites that have successfully competed with Craigslist in some categories, such as StubHub for ticket sales, TaskRabbit for "gigs," and Etsy for arts and crafts. None of these was enough to shake Craigslist's traffic or impact its revenue, which historically has only come from real estate, jobs, and until recently, sex. Craigslist has more competition in the jobs category, which according to AIM brings in the bulk of its revenue. However, like online daters, job-seekers will look on multiple sites — and the price of a Craigslist job ad is low enough to keep employers posting.

Craigslist may have also noticed the birth of a young startup facilitating temporary housing rentals. Airbnb cut its teeth at the Y Combinator accelerator program, toddled around raising money from investors, and was valued at a billion dollars by age three.

Craigslist charges for just a few types of ads: $25 to $75 for job postings in certain cities, $10 for brokered apartment listings in New York, and $5 to $10 for "therapeutic services" ads, which have taken in some of the refugees from the shuttered "adult services." Temporary by-owner rentals are not a revenue generator for Craigslist, so Airbnb hasn’t cut into its business. But Airbnb expanded into sublets last year, and it could easily start serving real estate professionals, who brought in around $13 million for Craigslist in 2011 according to research firm AIM Group.

Like Craigslist, Airbnb is a peer-to-peer marketplace. But while Craigslist is vintage internet, Airbnb is a collision of all the hottest industry trends, including the rounded corners of chic web design, the recession-friendly idea of resource sharing, an obsession with convenience, and a premium on user-friendliness. Even the most basic features, like the ability to pay on the site, draw stark contrasts between the two. Airbnb has Facebook integration, user reviews, private messaging, maps that populate with new results as you zoom in and out, and lots of big, pretty pictures. "I unabashedly adore the site and most everything about it," wrote Victoria Morehead, a creative director at Brooks Bell, in an open love letter to Airbnb. Sure enough, the site makes her "swoon with geeky admiration."

"Craigslist realizes that if it doesn't do anything, it's going to have more Airbnbs on its hands."

"Craigslist lost the market segment to Airbnb for the apartment rentals," said Greg Kidd, CEO of 3Taps, which is being sued by Craigslist for use of its listings and is counter-suing right back for anti-competitiveness. "They haven't innovated in the last ten years. If you've seen Airbnb's site, they obviously have innovated. It's kind of a hands-down contest. I think Craigslist realizes that if it doesn't do anything, it's going to have more Airbnbs on its hands."

Craigslist's traffic is still strong with more than 50 billion page views per month. Its global ranking according to Alexa has only shifted a few positions, from 36th two years ago to 41st as of this writing (given Alexa's unavoidable imprecision, this is not a terribly significant drop). However, revenues have flattened. The company experienced its first revenue dip ever in 2011, according to AIM Group, partially due to the elimination of the "adult services" category in late 2010 after being pressured by human rights groups and attorneys general.

The change wasn’t devastating — $121 million in 2010 to $115 million in 2011, about a five percent difference — and on its own it might not have catalyzed the company to action. Life at Craigslist is pretty steady. The company has between 30 and 40 employees, meaning one employee corresponds to more than 1.5 million users and at least $2.5 million in revenue — a better employees-to-earnings ratio than even Google, according to calculations made by the venerable software maker 37signals in 2010.

Craigslist’s tiny team is kept plenty busy just maintaining the status quo at the beloved network, where the complacence of founder Craig Newmark and CEO Jim Buckmaster borders on anti-capitalist. "Companies looking to maximize revenue need to throw as many revenue-generating opportunities at users as they will tolerate," Buckmaster told Wired in 2009. "We have absolutely no interest in doing that, which I think has been instrumental to the success of Craigslist."

Despite all the doomsaying about Craigslist coming from Silicon Valley, there’s no sign that the company is in any danger — yet. There is no evidence that Craigslist's traffic is meaningfully waning or that its competitors are anywhere close to overtaking it. Its power as a cultural force hasn’t diminished, either. The latest Craigslist documentary,Craigslist Joe, which follows a penniless 29-year-old as he survives off the site for a month, came out in August and was produced by Zach Galifianikis.

"At some point or other, if you want to stay relevant as a website, you have to improve."

But with competitors biting at its ankles, Craigslist has finally woken up from its complacency. In order to keep its place as the 39th largest website in the world and the 9th largest in the US — where it is now, according to Alexa — it may be necessary to give users more than a massive collection of blue links.

"Are they at risk of being nibbled to death by all of the niche ducks that are out there like Airbnb, like many of the dating sites, like many of the other kinds of sites that have come out that do a better job in a particular category?" said Peter Zollman, founder of AIM Group, who has studied Craigslist since the company first expanded beyond San Francisco in 2000. "I'm not sure that is happening, or whether it will happen. But they certainly are at risk of that."

Map View is Craigslist's first significant update since the early aughts, he acknowledged. "It's about time that they came out of the 19th century and started putting things on their site that users clearly want," Zollman said. "You can’t stay in the 19th century forever even if you are not capitalist. At some point or other, if you want to stay relevant as a website, you have to improve."