Bono: 'it's social movements that change things, not personalities'

Bono: 'it's social movements that change things, not personalities'

Democratic participation can work wonders, and technology can be its enabler

Speaking at the F.ounders conference in Dublin today, U2 lead signer Bono was effusive in his praise for grassroots social movements and the change they can effect on a global scale. The Irish rocker attended the event to promote the ONE anti-poverty campaign that he leads together with a number of other well-known figures, but his message was firmly focused on what we, the anonymous masses, can do by simply participating.

"Make it dangerous for a lawmaker to object to a bill that's transformative on behalf of the world's poor."

Citing the example of an Iowa Congressman that was opposing exactly such a piece of legislation, Bono pointed out that it was the strong and persistent backlash from his constituents that forced him to yield in his objections. Similarly, the Drop the Debt campaign and march that Bono was involved in organizing produced tangible results in pushing developed nations to cancel debt to developing countries in Africa. It's a familiar refrain about the effectiveness of direct democratic participation, but its undercurrent is about the importance of information technology.

How can you keep your Congressman in check if you don't know what he's doing behind the closed doors of Capitol Hill? How could the Occupy Wall Street movement have been mobilized without the communication facilitated by the web? Transparency is of profound importance to a democratic society and technology is one of the keys to unlocking the information we need to effect meaningful change.

"The 21st century began last year in Tahrir Square, where the the pyramid of power was inverted."

Couching his argument in more dramatic terms, Bono goes on to say that "the 21st century began last year in Tahrir Square, where the pyramid of power was inverted." He is, of course, referring to the Egyptian uprising that resulted in the overthrow of dictatorial leader Hosni Mubarak, a campaign that was built upon a foundation of social networking organization, with such standout Facebook groups as the 6th of April Youth Movement and We are all Khaled Said. The organizer of the latter group, Wael Ghonim (pictured below), was imprisoned for his efforts to spread information about the treatment of Khaled Said by Egyptian police, but he considers that a small price to pay. He agrees with Bono in believing that "technology narrowed the gap between the power the politicians have and the power that average individuals have." 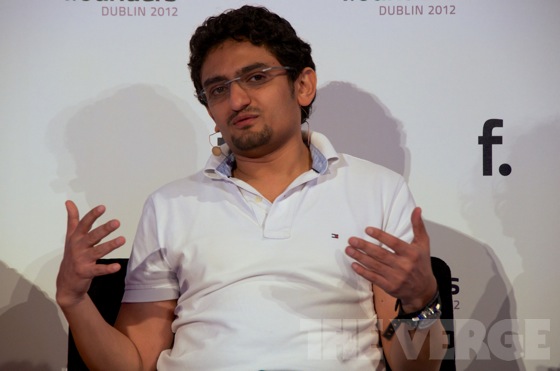 In the past, says Ghonim, "there was leadership by charisma," whereas with a social movement, leadership is distributed more broadly, making it difficult if not impossible to shut down. The Egyptian revolution "was so successful because there was no head" — there was no figurehead for the oppressive authorities to remove or muzzle. They could arrest Ghonim, but they couldn't stifle all the other participants in the movement.

"Technology narrowed the gap between the power of politicians and the power that average individuals have."

Further examples thrown up by Bono include websites like ipaidabribe.com, which documents instances where people were forced to pay a bribe to get something done. It's a way to expose and shame corruption, which to Bono is "the biggest disease of them all." Corruption, he argues, "kills more kids than tuberculosis, malaria and all the other diseases," and what his organization and others are doing is "working on transparency as a sort of vaccine" against it.

The free flow of information and social movements have a symbiotic relationship. You can't mobilize large groups of people without informing them, but then the dissemination of relevant knowledge, particularly when it's against the interests of a ruling regime, is difficult without widespread participation. Still, Bono and Wael — two people with direct experience of technologically-assisted democratic activism — are both hugely optimistic about the potential we all have for improving the world around us through the exercise of our sociopolitical powers.