MoviePass, take three: can a subscription service reignite the US box office?

An exciting concept with some frustrating limitations

Share All sharing options for: MoviePass, take three: can a subscription service reignite the US box office?

Subscription services like Spotify and Netflix have taken root in different areas of the entertainment industry in recent years, framing themselves as potential cures to declining sales and ever-shifting consumer interest. MoviePass, which launches its invite-only service today, brings that same all-you-can-eat media model to seeing movies in the theater — but whether it will be enough to reverse a decade-long trend of declining attendance is another question entirely.

The name MoviePass may sound familiar; last year the company partnered with a ticket aggregator to trial the service in San Francisco theaters. It was forced to call things off after theater chains complained that they'd never been consulted (AMC went so far as to tell locations to not accept MoviePass purchases). Today's launch actually represents the third iteration of the service.

A movie a day for a flat monthly fee

For between $24.99 to $39.99 per month — the amount varies per market — subscribers get one movie ticket per day (3D and IMAX showings aren't supported). MoviePass is touting the service's mobile app integration, but it's really based around a specialized debit card. Subscribers go to a theater showing the film they want to see, and select their screening from the MoviePass iOS app (an Android version will arrive in the coming weeks). The app unlocks the debit card, and users then use it to buy their ticket at the theater as they normally would. 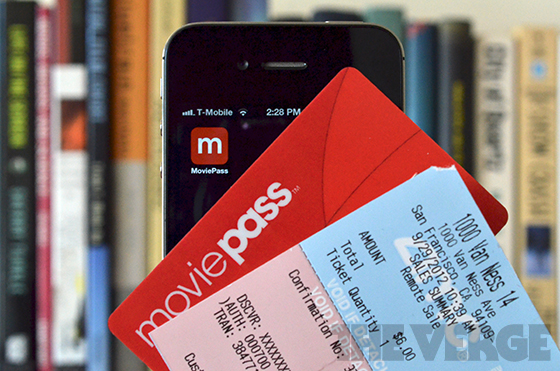 If it sounds a bit clunky, it is. There's clearly financial savings to be had — going to just four movies in a major city can easily cost $45 or more — and buying a spur-of-the-moment ticket is an easy call when there's no immediate cost. MoviePass is asking a lot for that savings, however. Rather than making the process of going to the movies more convenient, like Netflix did for home viewing, the debit card and app add a layer of complexity. You also can't use MoviePass if you want to order tickets in advance, something that is almost essential to those metropolitan moviegoers that stand to see the biggest savings.

According to MoviePass CEO Stacy Spikes, however, the new product is the result of discussions with the major theater chains. Theaters already partner with the likes of Fandango and MovieTickets.com to sell tickets online, and didn't want another service getting in the way of those relationships — hence the limitation of only buying tickets in the theater itself. "We needed something that wasn't pulling anything out of inventory and didn't affect their contracts," Spikes told us. "That's basically what we've created."

US movie attendance has dropped more than 18 percent since 2002

Spikes also says that theater chains have been pleased with the results of the company's recent closed beta. MoviePass saw attendance shoot up as much as 64 percent — and there's no doubt the entertainment industry needs some kind of boost. Domestic theatrical attendance has been on the decline for years, with a 2011 report by the Motion Picture Association of America revealing that admissions in the US and Canada had dropped over 18 percent since 2002. This year looks to be no better, with the 533.5 million tickets sold this summer representing a four-percent decrease from last year — and the lowest summer turnout since 1993.

Increased ticket prices — including expensive 3D showings — have helped mask the attendance drop, but it's for that precise reason that theaters are likely wary of a service like MoviePass. In the publishing world, the Authors Guild complained that the low cost of Kindle ebooks undermined the pricing of their physical counterparts, and a similar thing applies here: if a subscription service changes the perceived value of a movie ticket, it will be that much harder to get consumers to pay $14.25 for a 3D showing of Transformers 4. "We're not going to let anybody outside set prices for us," Jack NyBlom, the owner of Cameras Cinemas, told Variety back when the first MoviePass trial was scuttled.

Of course, if trends continue — or if MoviePass proves successful— theater chains may have no choice but to embrace the service. 75,000 individuals on the company's waiting list are getting access to MoviePass today, and after Thanksgiving they'll be able to invite friends, expanding the service even further. It won't take long for MoviePass to get a good sense of the impact it's having on film enthusiasts. Spikes, however, doesn't think theater owners will have any issues this time. "We're paying full price. We think that it'll be win-win, and there's not going to be any backlash," he said. "I think that in time all great ideas, if they serve everybody well, they'll survive."