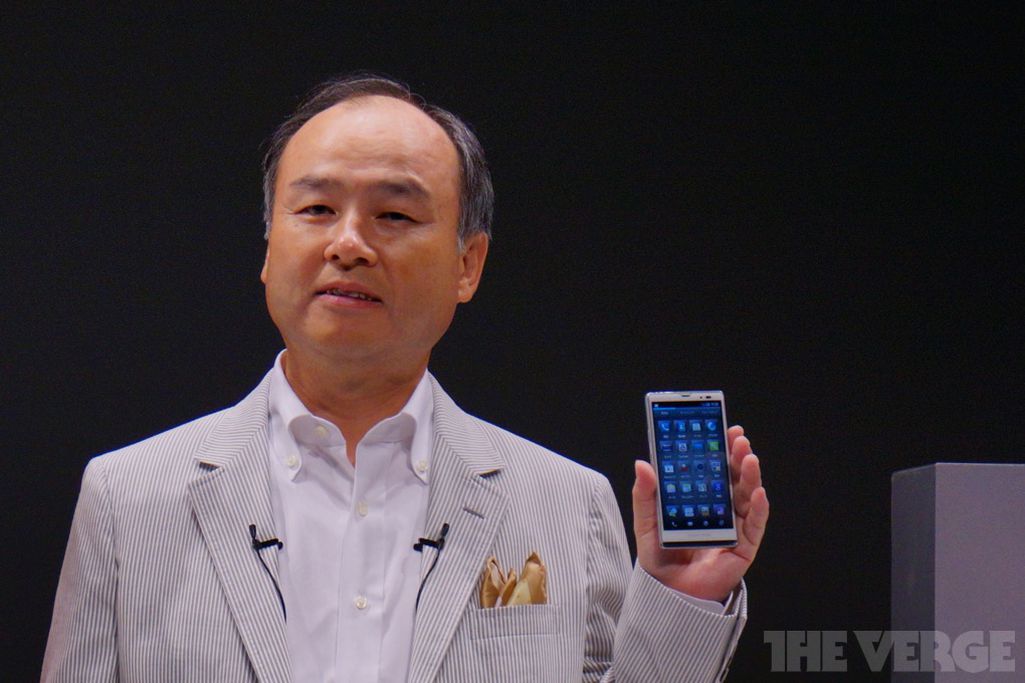 With SoftBank having just completed its massive acquisition of Sprint this week, here's a look back at The Verge's profile of Masayoshi Son, SoftBank's enigmatic boss.

When Sprint CEO Dan Hesse — a tower of a man — took the stage in Tokyo last week to shake the hand of his comically shorter boss-to-be, it was the first time many in the West had gotten a glimpse of the enigmatic entrepreneur. But to those in the know, SoftBank founder and CEO Masayoshi Son's acquisition of Sprint is merely the most recent in a long line of power moves. His comfort in making big bets is to blame for a number of setbacks over the years, but this same risk-taking attitude and a shrewd negotiating style have made him a constant source of inspiration for traditionally risk-averse Japan. So who is Masayoshi Son, and how did his company, which started as a computer software distributor, become one of the most dominant forces in the global telecom industry? 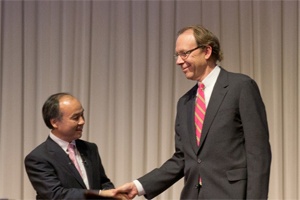 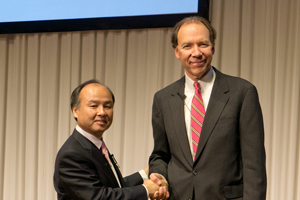 Son grew up in Saga Prefecture, Japan, born in 1957 to a second-generation Zainichi Korean family. Fascinated by America, he went to the US at 16 for a short-term study abroad program, eventually quitting school in Japan and moving to San Francisco a year later. Never one to waste time, upon enrolling at his new high school, Son insisted that he already knew everything in the textbooks, arguing that he ought to be able to take the college preparatory exam right away. When the school caved and let him take the test he argued that it wouldn't be fair unless he was able to take it in Japanese, eventually getting permission to use an English-Japanese dictionary, passing the test, and quitting the school two weeks after he enrolled. This pushiness would be a common element in many of Son's successes as a businessman.

Determined to make a name for himself in his 20s, he began studying economics at UC Berkeley in 1977, at the same time getting his first introduction to the world of microchips. Son was convinced early on that he could make a fortune with computers, and he committed to a relentless schedule of one new entrepreneurial idea per day. By the end of the year he would amass more than 250, including an idea for a translation device that he would sell to Sharp the next year for ¥100 million (a little over $450,000 in 1978 funds) — seed money he would use to start his first company in the US.

Son returned to Japan to start a software distribution company called Nihon SoftBank in 1981 — the name was later shortened in 1990. Despite having no software to sell, Son managed to nab an exclusive contract with both Osaka electronics retailer Joshin and top Japanese software developer Hudson, quickly rising to the top of the country's nascent computer industry, grabbing some 50 percent of Japan's retail market for computer software by 1984. Over the years Son got involved in a number of other ventures including a telephone-routing device, magazine publishing, the Comdex trade show, and broadband internet service, before betting big and losing, to the tune of a billion dollars, on Kingston Technologies in the late 90s. The founders eventually bought Son's 80 stake in the company back for less than a third of what he paid. 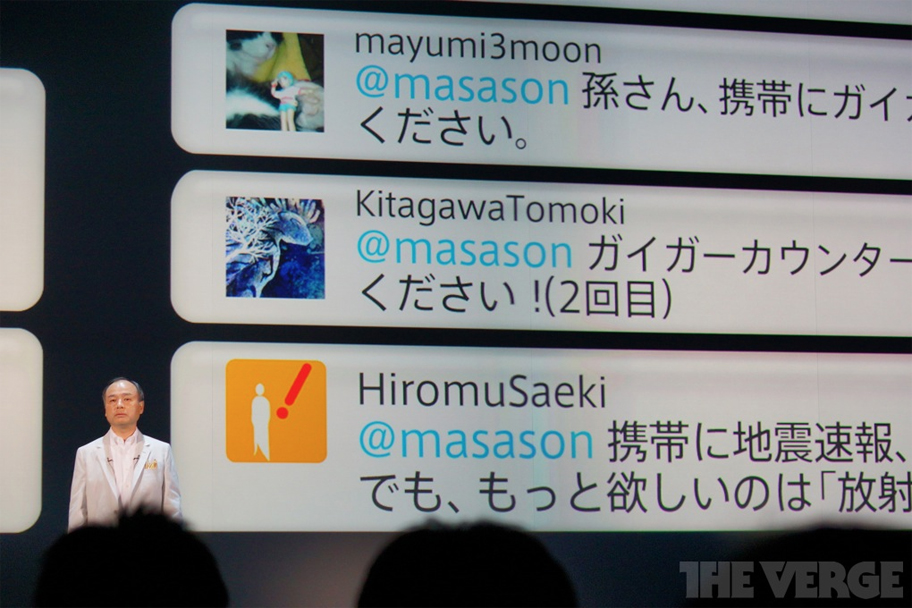 During this time, Son remained a fixture in the business press, often referred to as the "Japanese Bill Gates." Son differs from most tech CEOs in a couple of ways: his penchant for taking big risks, and his incredibly visible public persona, verging on celebrity. He's the most followed person on Twitter in Japan, for example, frequently bouncing from excited proclamations on baseball ("The Hawks wonnnnn!") to the mobile industry ("The iPhone 5 has appeared. Thin! Light! Fast!") to profound ruminations on personal growth, asking himself "Aren't your goals too low? Aren't you dissatisfied with an ordinary life?" ahead of the Sprint deal's announcement.

The serial entrepreneur also has a very public admiration for Steve Jobs, whom he views as a "modern-day Leonardo DaVinci." He claims to have first talked with the Apple founder about something like the iPhone shortly after Jobs's return to the company. To hear Son tell it, he had been considering getting in the mobile industry for years, but yearned for the right "weapon." In Diamond Magazine, he recounts a story of talking to Jobs about the future of the internet under Larry Ellison's sakura tree. He says he told Jobs he was the only one in the world that could make a revolutionary phone, and that the two agreed to collaborate once Son got the proper license to operate a telecom business. After Apple began work on the device, Jobs reportedly told Son he would "piss his pants" when he saw it.

After years of trying to enter the mobile market, SoftBank became an operator in 2006 when the company bought out the struggling Vodafone Japan for around $15 billion. Like many foreign companies Vodafone had found it difficult to adapt to the uniquely tailored Japanese mobile industry, but in 2008, Son found the "weapon" he needed to attack the market. The iPhone would become the single biggest factor in establishing SoftBank as a mobile force; a device that Son says gave him goosebumps the first time he touched it. Since the debut of the iPhone 3G, Apple's iPhone remained exclusive to SoftBank until the 4S expanded to KDDI last year.

It's worth considering just how much of a risk the iPhone was for Son and SoftBank; it was a revolutionary phone everywhere, of course, but perhaps even more so in Japan. When it arrived in 2008, it was barely functional in the eyes of many Japanese customers. After all, its camera couldn't focus on QR codes, the PC-style Safari browser didn't work with dedicated Japanese mobile sites, and the fragmenting of SMS and email into separate apps made little sense to users accustomed to Japan's all-in-one approach to messaging — not to mention the lack of emoji.

SoftBank eventually turned the iPhone into the most popular smartphone in Japan, though, despite the company's third-place market position, thanks in large part to Son's tried-and-true strategy of offering desirable new technology at unprecedented value. While the iPhone initially failed to make much impression, SoftBank started offering it for free with significantly cheaper unlimited data packages than other carriers were offering. Japanese customers — often inaccurately stereotyped as strictly preferring domestic brands — fell for Son's proposal wholeheartedly, and it's now at the point where you can't walk onto a train in Tokyo without seeing several iPhones in hands. 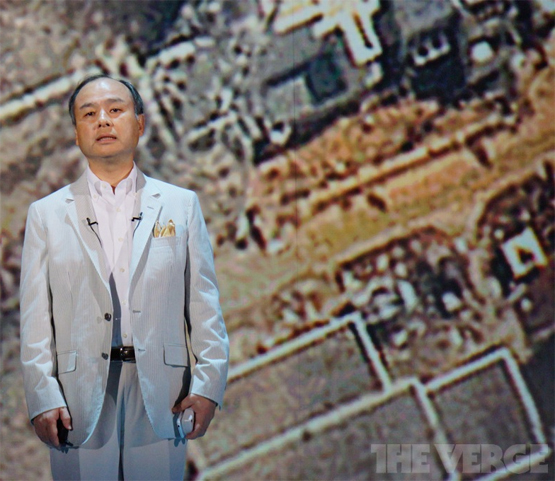 Another arena in which Son has gotten a lot of attention is his philanthropy. In the wake of last year's disastrous tsunami and nuclear meltdown, the CEO donated ¥10 billion (around $125 million) to relief organizations and pledged all his future salary from SoftBank to orphaned children in the region. A charismatic and articulate speaker, he regaled us at SoftBank's summer lineup event with tales of Twitter users turning to him for advice in the wake of the tragedy, shortly before unveiling a phone with a built-in radiation sensor. Son said he personally decided to develop the product after listening to the concerns of users, and has been outspoken in his opposition to nuclear power — perhaps the single biggest political issue in Japan right now.

The CEO's outspoken nature and risk-taking attitude make him a controversial figure in Japan. Perhaps most infamously, he once threatened to immolate himself in a government meeting over a regulatory dispute with NTT. More recently, he personally lost $1.3 billion from his net worth when his company's shares nosedived on reports of the Sprint acquisition, seen by many at home as an unnecessary risk. And, while SoftBank has established itself with some clever branding and a popular advertising campaign, the actual service has often lagged behind competitors NTT Docomo and KDDI. The iPhone overloaded SoftBank's 3G network in Tokyo especially, and although the recent allocation of 900MHz "Platinum Band" spectrum should have alleviated issues, the last-minute announcement and deployment of 4G LTE in time for the iPhone 5 has again reduced 3G capacity as the operator had to re-allocate a quarter of its 2GHz spectrum.

Still, Sprint isn't in fantastic shape itself, and someone like Son, who said he wants to be an active chairman, could be just what the company needs. Though he once said he'd never invest in companies with debt, Sprint represents the CEO's best chance to take SoftBank towards his stated goal of becoming a top ten company worldwide. With substantial capital and clear motivation, we imagine the very least Son will do for Sprint is infuse it with money and direction. "I'm a man," he said when announcing the Sprint deal, "so I want to be number one." Make no mistake — despite the company's current distant third position in the US, number one is exactly where Masayoshi Son will be hoping to take Sprint. 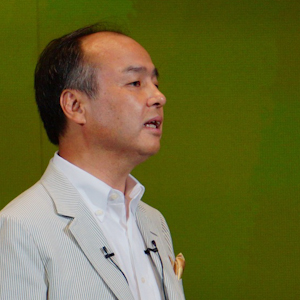